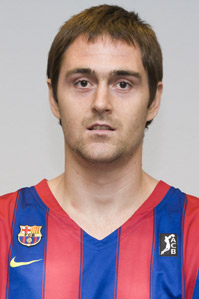 Born on 21 February 1984 in Ljubljana, Slovenia, he learnt his trade at one of his countries most important clubs, Union Olimpija.

Season 2003/04
The following season Lorbek came back to Europe and joined Fortitudo Bologna, where he played with Gianluca Basile for two seasons. In his first season, his stats were not too impressive as he struggled to adapt: 4.1 points and 3,1 rebounds over the 32 games he played.

Season 2004/05
In 2004/05 he was named the Euroleague Rising Star of the Season and also won the Italian league title and the 2005 Super Cup, playing a total of 45 league games and 20 in the Euroleague. He was also a second round NBA draft choice at number 46 for the Indiana Pacers.

Season 2006/07
The next season Sergio Scariolo signed him for Unicaja Malaga, but the move didn't work out and he soon returned to Italy, where he won the 2007 Italian Cup with Benetton.

He finished off the season at his third club that year - Virtus Roma, where he played 21 games and averaged 12,9 points and 6 rebounds.

Season 2007/08
He stayed in Rome for the next season and although he failed to win any titles, he was rapidly improving, particularly it seemed, against Barca, scoring 13 points in Rome and 8 at the Palau in the regular season of the Euroleague. In the Top 16, he improved even more, chalking up 12 points in Barcelona and 16 in Rome. His stats for the season in Europe were 13.3 points and 5,6 rebounds in 20 games.

Season 2008/09
His performances at Rome earned him a contract with CSKA Moscow, where he won the Russian Championship and was runner up in the Euroleague, losing to Panathinaikos in the final after defeating Barca in the semis. Lorbek was also voted Euroleague Player of the Month in March and April and named in the Euroleague second ideal starting five.

He also recorded his best stats in Europe, scoring his most points in a game (33 points against Partizan), highest number of rebounds (12 against Siena), and most minutes played (37 against Partizan). His averages over the season were 12 points, 23 minutes and five rebounds.

Season 2009/10
Lorbek finished the season with a 9,96 point average, 4 rebounds and 63% success in two pointers, as well as receiving 2.6 fouls per game and achieving a valuation of 12,03. He really grew over the season, showing the promise he’d shown in the European Championships in Poland. His best game in the ACB was probably against Blancos de Rueda de Valladolid, in which he scored 18 points in his 25 minutes on court, getting 11 rebounds and achieving a 25 point valuation.

In the Euroleague, Lorbek was at his best away to Panathinaikos in the Top 16 game when he got 10 points and 10 rebounds with a valuation of 22 points. He also played an important part in the semi final win against CSKA, when he took 9 rebounds against his ex-team (five defensive and four on offense)

Lorbek was also included in the Euroleague second team and was part of the ideal five of the ACB, alongside Tiago Splitter, Ricky Rubio, Juan Carlos Navarro and Carlos Suárez.

National Team
Lorbek was a stalwart of the Under 16, Under 18 and Under 20 teams, winning silver at the 2002 European Championships with the Under 20s and winning gold two years later.

In his most recent Championship with Slovenia, he was voted one of the ideal starting five of the 2009 EuroBasket in Poland in which his team finished in their highest position ever -fourth.

Others
Lorbek has plenty of other talents apart from being a crack basketball player. He studied at music school in Ljubiana between the ages of 8 and 16 with his younger brother Domen and although he has not kept up with the piano as much as his brother, he still plays electric organ to remind himself of those pianos in Slovenia.

PROFILE
Lorbek is a versatile player whose human qualities have always helped him adapt to new systems, new team-mates and new competitions every time he has changed countries. He’s a good, decisive center playing with his back to the basket and above all a reliable shooter of three-pointers.

Lorbek can play with his back to the basket but also has a good exterior throw (44 % in three-pointers this season in the Euroleague). His stats with CSKA Moscow were excellent. He played 21 Euroleague games averaging 22.6 minutes, 12 points (60% of field throws and 44.4% of three-pointers) and 5 rebounds.