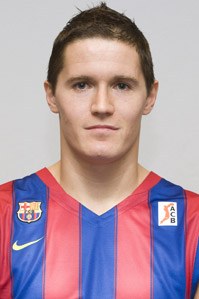 Lakovic learnt his basketball with Slovan Ljubljana, one of the reference points of the Balkan school of basketball and is considered one of the best players in his position on the European continent.

His speed and reading of the game took him to the Slovan first team at only 18 years old.

After winning everything going with Panathinaikos, he joined FC Barcelona in 2005. His aim was to win the one title that had eluded him, the Euroleague. He is a full international for Slovenia and in 2009 achieved fourth place in the European championship in Poland, Slovenia’s best ever finish.

In 2006, he took part in Slovenia’s first ever World Championship.

1998/99 season
Jaka spent two seasons settling in to the senior squad but in his third season produced some great stats. He averaged 14.4 points and 57.7% of field shots in his 30 games.

1999/00 season
His numbers dropped slightly the following season (45.8% instead of 57.7%) though he stayed above the 10 point barrier and his potential in the exterior shot became apparent (+ 41%).

He gave 61 assists during the regular phase, 15 more than the previous season.

2000/01 season
In his last season in Ljubljana Jaka Lakovic regained the stats of his first year: 22 games, an average of 14.3 points and 53.1%. With these stats he was determined to move on upwards and play in the Euroleague.

2001/02 season
At the age of 23, Jaka Lakovic signed for Novo Mesto, also in Slovenia, where he produced the best season of his career in the Slovenian league. His spectacular stats left a lasting impression. 64% field shots in the regular phase and an average of 17.6 points. In the Euroleague he scored the second best points total in the history of the competition with 38 points against Real Madrid. In Group C, Novo Mesto came up against Panathinaikos. The Greek club won the competition and also incorporated Lakovic, impressed by his stats of 20.9 points and 53.7% of field shots.

2004/05 season
Three years after his debut with Panathinaikos, Lakovic was voted MVP. Panathinaikos did the double again with Lakovic in a starring role (13.6 points and 57% two-point shots). In Europe he was named in the second best Five thanks to his average of 15.1 points in 25 games.

2005/06 season
He continued to accumulate silverware in his final season in Greece: league, Cup and MVP. In his 33 games, he averaged 12 points while in Europe he averaged 14.4 points and 45% of two-point shots.

2006/07 season
He moved to Barcelona and became a vital part of the team. In his first season, he played more minutes than any other squad member except Juan Carlos Navarro. In the ACB he averaged 11 points and 3 assists, and a valuation of 11. He improved his stats in the playoffs: 12.4 points, 3.8 assists and 13.3 valuation. He enjoyed similarly good numbers in the Euroleague. 10.3 points, 3.5 assists and a valuation of 11.

2008/09 season
He played a big part in bringing the ACB title back to Barcelona. Although he only averaged 8 points, this has to be seen in the context of his contribution to the team and the fact that he was out of action for two months after an operation.

His return to the court coincided with the quarterfinals of the Euroleague in which he had a starring role, especially in the second victory against Tau.

He really proved his value in the final of the ACB and was rewarded with a two-year extension to his contract.

Lakovic averaged 10 points per game in the Euroleague and 8 in the ACB and his importance in the team was highlighted by his average of 3 assists. His percentages were 50% (2-point shots), just over 41% (3-pointers) in Europe but more than 65% in the ACB.

2009/10 season
Injuries prevented Jaka Lakovic from enjoying a full season as the Slovenian missed nine games in the regular season as he was out with a back injury before he sprained his ankle in December. Despite those setbacks the guard who captained his country at the last World Cup did appear in 33 games on the domestic front in both the regular season and the playoffs. He also achieved an average of 5.2 points and 13.5 minutes. Lakovic's best game of the campaign, and the one where he set his best records, came in Guipuzcoa where he scored 14 points and managed three assists in 25 minutes.

The Euroleague saw Lakovic shine, despite his time on the sidelines, as the number 10 finished the season with a 43.9 per cent success rate in triple pointers, which was the second best total of his career. Playing in his fourth season with Regal Barēa he scored an average of 6.3 points in 13 minutes of plays and against Partizan Belgrade recorded his best game with 14 points scored on the court and a valoration rating of 17. Having helped the Blaugrana to win the Euroleague, Super Cup and Copa del Rey, Lakovic is one of few players that can now say that he has won every available trophy with Regal Barēa.

National Team
Jaka Lakovic started playing for Slovenia in the youth categories. In 1998 he won the silver medal in the under-22s European championship in Trapani (Italy) after being defeated by Yugoslavia in the final.

Three years later, Lakovic made his full international debut in the European championship in Ankara 2001 (Turkey). However, Slovenia could only finish 15th.

However, in 2005 Slovenia made the breakthrough and finished in 6th place in the Belgrade European championship after battling it out against tournament favourites France and Greece. His averages of 12.8 points and 4.2 rebounds put him in the second best starting 5 of the tournament.

2006 was a turning point for Lakovic and Slovenia. They qualified for the World championship for the first time and stayed in contention until they were beaten in the R16 by Turkey. Lakovic played his usual key part and averaged 11.7 points, 51% field shots and 60% 3-point shots.

In the European championship in Spain, Slovenia was one of the strongest teams with players such as Lakovic, Nesterovic and Smodis. In the first phase they only lost to Lithuania (featuring Jasikevicius) but in the quarterfinals surrendered a 12-point lead with 2 minutes on the clock to lose to Greece (63-62). Lakovic led Slovenia with an average of 14 points.

Although not considered one of the favourites, Slovenia prepared excellently for the European championship in Poland. The team coached by Jure Zdovc featured Jaka Lakovic and Erazem Lorbek while team captain Matjaz Smodis missed out through injury. With Lakovic leading the way with almost 4 assists per game, Slovenia achieved a record fourth place.

Jaka Lakovic also made a big impact in the game for 3rd place. Slovenia had Greece on the ropes and Lakovic accumulated 16 points. But Slovenia lost by a single point (57-56).

CHARACTERISTICS
Lakovic is classic Balkan player. His speed and vision have led to his being considered one of the best playmakers in Europe right now.