Barēa Sorli Discau finished the regular phase of the European League unbeaten. Barēa beat Blanes away in a fairly dull game that marked the debut of the junior player, Mark Julią. 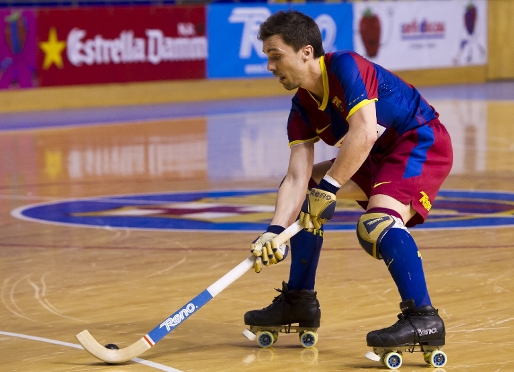 Referees: Rotelli and Perrone (ITA)
Six wins from six games. The regular phase of the European league has been perfect for Barēa Sorli Discau, who are trying to retain the European title, and do it in the best way possible. Barēa, who have been thinking about the Final Eight for some time now, didn’t want to show disrespect to either the match or their rival in the last game, one that didn’t really matter, as Blanes are also qualified for the European Finals.

So, Ferran Pujalte planned for a calm match. Aitor Egurrola started the game and Sergi Fernįndez played the second half. Rotations were also the order of the day, and above all, the junior player Marc Julian - who came into the game replacing Alberto Borregįn, missing with arthritis in his right wrist - had his moments of glory.

Despite being a game without tension, Barēa started strongly, and within four minutes David Pįez put them 1-0 up following a Carlos Lopez pass. Barca's second goal came six minutes later, also after good team combination play. Sergi Panadero put Jordi Adroher in to make it 2-0, and the score remained the same until the break.

In the second half, both teams were a bit more relaxed, but Barēa went 3-0 up with a goal from Reinaldo Garcia, but in a double counter-attack, Jepi Selva captured a rebound, and his speed surprised Fernįndez.

The joy of the Blanes goal only lasted for two minutes, the time it took Marc Torra to make it 4-1. The last goal came from a penalty, scored by penalty specialist Petxi Armengol, and the game ended 4-2 to Barēa.

"The team enjoyed it," Ferran Pujalte said, who recognised that for both Barēa and Blanes the game was not too important: "Both defenses were pretty relaxed, better in the first half than the second". He did want to highlight the debut of Marc Julią, the best example of a game played comfortably and pretty well by Barēa...