Barēa Sorli Discau came successfully through the game against Follonica. Barēa took the lead in the first half, although the Italians equalised just before the break. In the second half, Barēa upped the pressure, and scored 3 more goals. 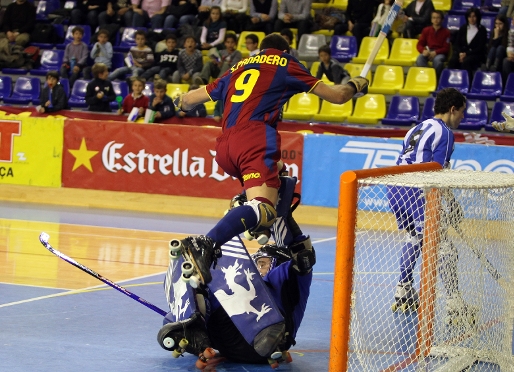 Referees: Lamela and Torres (POR)
The fifth group game of the Champions League resulted in Barēa Sorli Discau’s fifth win. Barēa beat Follonica in their away game in Italy 4-2, with 2 goals from Panadero, and 1 each from Borregįn and Adroher. This was the penultimate game of the group phase, the next game beinge in Blanes, the other team already qualified from Group B.

Before the game the Barēa players wore shirts of encouragement for Eric Abidal, and there was a minutes silence in memory of Quim Paul’s son, who died yesterday.

Follonica tried everything in their last throw of the dice to
qualify for the last eight, but Barēa held the ball well and protected their goal, and Sergi Panadero got the goal they deserved, coming up to the break.. With the half-time whistle approaching a long shot from Salvadori surprised Sergio Fernandez, and tied the game at 1-1.

More pressure and game over

In the second half Barēa Sorli Discau went all out for the deciding goals, which came within 6 minutes of the restart. The Barēa captain Beto Borregįn made it 2-1 to Barēa, and very quickly Panadero scored his second and Barēa’s third, with the fourth goal from Adroher putting the game beyond the Italians reach.

Pujalte’s team generated a host of chances but luck was not on their side and just before the end Pagnini reduced the distance, but the game finished in a convincing 4-2 win for Barēa..