Barēa Sorli Discau swept past bottom side Lloret with an imperious display that saw five second half goals. Borregįn (2), López(2), Reinaldo and Adroher were Barēa’s scorers. 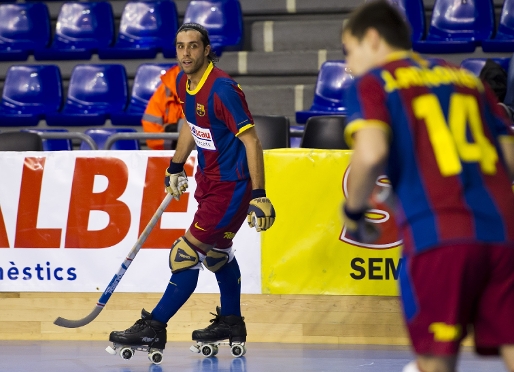 Referees: Gómez and López
Lloret had no answer to Barēa’s attacking play as the visitors turned on the style to win 0-6. More goods news came through with Liceo’s defeat and with Reus due to play on Sunday, Barēa are now just 5 points off the leaders.

Barēa came out determined to do the job and after just 7 minutes Alberto Borregįn made no mistake against Serra and put the team one up after a good assist from Marc Torra.

Barēa rang the changes early on, bringing Torra on for Reinaldo, whilst Lloret desperately attempted to stem the tide with a series of changes and time outs. The hosts had a few slight chances, but the possession and domination of the game was with Pujalte’s men, even though they were unable to add to the scoreline before the break.

That soon changed in the second half though, as Borregįn latched onto a pass from Mia Ordeig after just 30 seconds to get his and the team’s second.

Barēa now turned up the heat and Carlos Lopez marked his 34th birthday (on Sunday) with a typically clever individual move that ended in an unstoppable shot to make it three. Lloret were groggy now and Lopez hit them on the counter straight after for the fourth.

Although the Lloret keeper was able to stop a Sergi Panadero free hit as his team reached 10 fouls, there was little else for the home supporters to cheer as Reinaldo Garcķa made it five soon after.
The half dozen came up two minutes from the end thanks to Jordi Adroher and Marc Torra could have made it seven, but time ran out before he could take a direct free hit.