Barça Sorli Discau are into the semi finals of the Copa del Rei. Pujalte’s side overcame Vilanova 6-1 in a game they had under perfect control. 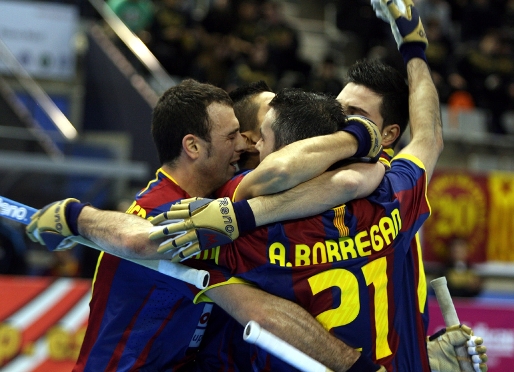 Last year’s semi finalists Vilanova were the opening opponents for Barça Sorli Discau, who scored twice in the second half and never really looked like losing.

Both sides made ambitious starts, but Vilanova’s morale was dented early on by a well taken Panadero goal. As the game progressed, their more limited bench started to show, and Borregán soon added another to silence the green-clad supporters who were the majority in the new Ciutat Esportiva in Blanes, who were further frustrated when Rocasalbas had a penalty saved by Egurrola. 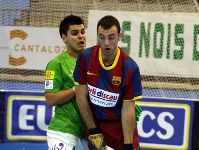 Vilanova came out strong in the second half, but their intense pressure failed to deliver any result, and it was Barça who got the next goal, once again thanks to Borregán. Two minutes later and Vilanova were again punished perhaps more than they deserved when Reinaldo García scored his first cup goal to make it 4-0.

The OK Liga’s top scorer, Jordi Ferrer, did manage to pull one back for Vilanova, but by now their fans knew they were going out of the cup, and started chanting the name of Barça’s biggest rival in this competition, Liceo. Unfazed, Barça made it five through Argentinian Carlos López, whose goal was so expertly converted that the whole pavilion could do nothing but applaud. It was one-way traffic by now, and a terrific play by Mia Ordeig was tapped home by Marc Torra to make it six.