Barça Sorli Discau lost by a narrow 4-3 score to Igualada in a close fought game on Sunday. García (2) and Alberto Borregan got the goals for Ferran Pujalte’s team.

After four wins on the run in the OK Liga and winning the Copa Continental 10 days ago in Bilbao, Sorli Discau saw their winning streak come to an end as Igualada, who had also beaten them 4-5 at the Palau, repeated their victory in an a exciting and close game which was decided by a late goal for the hosts to run out 4-3 winners.

The game began with plenty of excitement as both teams scored within a minute of each other with Formatjé putting the hosts one up after a good team move and Reinaldo García finishing off a great long range effort to draw level just a few seconds later. Torra and Panadero, who hit the woodwork, both had chances to put Barça ahead before the break, but the teams went in at 1-1.

The second half began even more frenetically, with Formatjé again putting Igualada in front before Alberto Borregan drew Barça level on 33 minutes, only for Navarro to make it 3-2 soon after. Egurrola then saved an Igualada penalty, before Reinaldo García converted one at the other end to make it 3-3. In just three minutes the scores had moved from 2-1 to 3-3.

The game settled down after that flurry of excitement and it looked as if a draw was the most likely result before Eduard Fernandez popped up to make it 4-3 to the hosts after Panadero and Borregán both had chances to win it for Barça. Reinaldo García was shown a blue card towards the end of the game which obliged Barça to play the final two minutes with a player less. 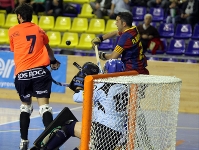