Barça Sorli Discau fought for victory against a GEiEG with an excellent goalkeeper. The players gave it everything and came away with their unbeaten record intact.

GEiEG Sidorme Hotels went 2-0 up, Barça pulled one back before the break, but then conceded yet another goal. But three goals from Carlitos López, Mia Ordeig and Borregán made it 4-3 in the end.

With Nalo out with a fractured finger, Reinaldo García was called up to the team although he didn’t get to play. 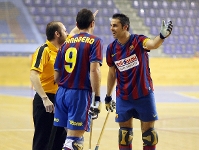 GEiEG played possession hockey and Casadevall and García made it 0-2 after 13 minutes.

Following a timeout called by Ferran Pujalte, Barça regrouped, Panadero and Carlos López were sent on, and within a minute Borregán had narrowed the gap (1-2). But a comeback was still looking difficult, with the visitors continuing to produce dangerous plays.

The second half started with Barça troubled by the foul count, and Farrés converting a free to make it 1-3 and almost making it 1-4 moments later. 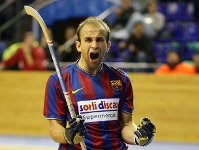 At one point, Barça were down to just three men on court thanks to blue cards, yet it was then that against the odds Carlitos scored to provide new hope.

The visiting keeper Fernández saved a penalty and also a shot from López that looked to be on its way in.

Then Fernández saved another penalty, but Ordeig was quick to pounce on the rebound and score the equaliser.

There were just 40 seconds on the clock when Borregán made it 4-3, and in one of the most gripping games of the season, Barça Sorli Discau managed to hold on to their unbeaten record.