Barca Sorli Discau closed a perfect first phase to their European League campaign with a 0-4 win over Bassano. Two goals each from Adroher and Reinaldo gave Barca the victory.

Bassano 54 had to win this game and hope that Lloret slipped up in theirs to stand any chance of making the Final Six of the competition and they came out hard with a strong defence that minimised Barca’s attacking options.

However, Barca made changes and were soon able to break the deadlock when Adroher hit a shot in at the far post after receiving a pass from Carlos López and the team went in one up at the break.

The Italians faded after the break as they tired from their first half efforts and Barca Sorli Discau began to look more comfortable. Dominating possession now, Barca made it two through a Reinaldo García penalty and the same player made it three soon after from a free kick, with Jordi Adorer putting the finishing touches to the win, dribbling past the keeper to slot home the fourth.

The win takes Barca into the Final Six with a hundred percent record of six wins from six, which no other team have achieved. 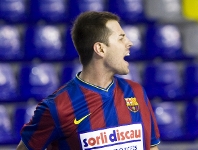