After 50 minutes plus 10 of extra time and 10 penalties in the shoot out, Barca Sorli Discau saw their cup hopes dashed as Vic won this semi final on penalties.

In a thrilling finale, Aitor Egurrola was shown a blue card and although Octavi Tarrés did his best and Reinaldo drew Barac level, it was the Vic captain Titi Roca who scored the decisive penalty to take Vic into Sunday’s final against Vilanova, who beat one of the favourites Liceo 3-4 after coming down from 1-3.
.
Focussed

Barça Sorli Discau came out focussed and determined not to give Vic any chances and played with a packed defence which made Mig Ordeig’s 5th minute penalty even more of a great start to the game. Barca continued to attack during the half, but also ensured a rapid coverage in front of the impeccable Egurrola.

Barca continued to avoid errors in defence in the second half until Carlitos López gave away a penalty, which Titi Roca put away to draw the teams level. Then the referees stepped in and in a flurry of cards showed a red to the Vic assistant coach and a blue to Reinaldo García. The fouls were coning thick and fast now, but neither team could take advantage of the 10th and as the clock ticked down both Egurrola and Fernández made great saves.

Extra time brought no change and the tie went to penalties. In Vic’s third round, Aitor Egurrola was shown a blue card for moving before the shot was taken and Octavi Tarrés had to step in. There was nothing he could do about Carbó’s goal, then Androher and Marc Torra both missed. Reinaldo García drew the scores level, but Titi Roca scored to put Vic through. 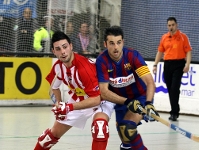