Barça Sorli Discau has beaten Shum Maçanet away in the last match of the first half of the OK League regular season. David Paéz opened the scoring right on the stroke of half time and Panadero and Masoliver added two more in the second period.

Barça Sorli Discau stays top at the end of the first half of the OK League regular season. They have the same number of points, 37, as Roncato Patín Vic but are leaders thanks to superior goal difference.

As expected, Shum Maçanet adopted a defensive strategy and initial attempts to break down the wall failed. However, on the stroke of half time David Paéz stuck the ball past Calonge with just 30 seconds left on the clock.

After the restart Quimo Paüls’s men took a mere five minutes to add their second when Sergi Panadero, who has been carrying a niggle all week, fired home.

Barça Sorli Discau then upped the tempo of the match and with Maçanet unable to keep up with them it was game over. With ten minutes to go Miquel Masoliver made it three nil with a superb free hit.

Barça still had time to create more chances but were unable to add to their winning margin.

The roller hockey first team has now completed a pretty hectic first half of the regular season, and after their efforts the players will take a well-deserved rest. The OK League doesn’t start up again until Saturday 3 January so the team will be on holiday until Monday 29 December. 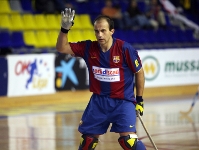