Barça Sorli Discau earned a vital point in their encounter with Valdagno at the weekend as they came from two goals down to leave qualification for the last eight in the Champions League in their own hands.

The draw in the European competition means that Quim Paüls' side now depend only upon themselves to progress as they recovered from a half-time deficit to take something from their trip to Italy. Osvaldo Raed netted a crucial brace to pull the Blaugrana firmly back into the game after the hosts had netted twice early on.

A bright start to the game saw chances at both end, but it was Valdagno that opened the scoring in the 12th minute when a swift move saw Argentinian star David Paéz beat Egurrola. Barça tried to raise their game, but within seconds had slipped further behind when Borregán had scored again and the Italians were in control.

Raed then began to come forward and he gave Barça hope by reducing the deficit with 14 minutes on the clock as he slotted the ball past Puzzella in the home team's goal.

The second half saw the Catalan visitors apply much more pressure going forward and they were unfortunate not to draw level by taking one of the five chances that came their way.

With just over five minutes remaining however, Raed found a way through again and this time made no mistake as he scored to equalise and from then it was anyon's game as both side pushed for a late winner that was not to materialise.

Now Barça Sorli Discau can qualify for the next stage of the Champions League by beating Vic in their next outing. 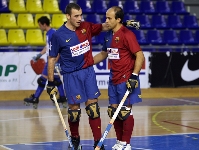