Barça Sorli Discau has beaten Coinasa Liceo at Riazor. Two goals by Mia Ordeig and one by Lluís Teixidó settled a good game of hockey between the best two defences in the OK League.

Barça Sorli Discau has picked up more than just three points from its 13th OK League fixture. At a packed Riazor, the win puts the Catalans back on top of the table though equal on points with Roncato Patín Vic, who also won this weekend by 2-1 against Cemex Tenerife.

Barça read the game right from the first minute with Aitor Egurrola, back after missing the last League clash against Sitges due to injury, outstanding.

Who could score first became increasingly important, as both defences were playing well. Overall the game was excellent entertainment.

The breakthrough came in the 12th minute when Alberto Borregán intercepted a pass to put Mia Ordeig through one-on-one against local keeper Jaume Llaverola and the Barça player duly scored.

Though there was still a long way to go, that first goal gave the Catalans a crucial psychological edge.

Ordeig and Teixidó close it out

Jose Querido’s men never threw in the towel, but it was the visitors who made and took their chances. Once again Mia Ordeig stormed forward on the break and fired home a shot just inside the near post.
Liceo now had to open things up more as they looked to get back in the game, and Barça took advantage as Lluís Teixidó scored from a Borregán assist to make it 0-3. 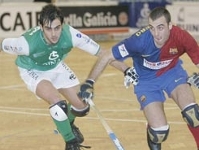