Barēa Sorli Discau recorded a comfortable victory against Cemex Tenerife. The Blaugrana came from two goals down to win thanks to efforts from Carlitos, Panadero, Masoliver and Borregįn.

Quim Paüls’ side picked up a confidence-boosting win ahead of their first European League game next week as they saw off the challenge of the Canary Island outfit.

The opening moments of the counter caught the visitors by surprise however, with Tenerife taking a two goal lead within the opening four minutes as Gerard Verges, who rose through the ranks at Barēa and left the club last season, and the former Vic player Quim Pujadas both netted. Those two goals left the visitors with plenty to do, but they were equal to the task.

There was little reaction from Barēa immediately, but they slowly began to play and find their rhythm and in the 17th minute Carlos López reduced the arrears and that was how the scoreline remained until the half-time interval.

After the break, the Blaugrana continued to improve and things began to turn in their favour with Miquel Masoliver combining with Sergi Panadero to draw the away team level.

Six minutes later and Panadero rounded off a textbook move and beat Nicoletti from around the penalty spot mark.

While Barēa looked better and better, Tenerife began to slow down and going behind after leading by two goals did not help.

The scoring was completed in the 50th minute when Borregįn met a pass from Masoliver to net the fourth of the evening for his team.

Barēa Sorli Discau have 16 points in the OK Liga after six games, with five wins and a draw. 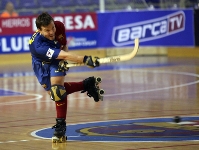