Barça Sorli Discau beat Grupo Clima Mataró in their first roller hockey game of the season. In a game involving key defensive errors on both sides, it was in attack that the sides shone, with Paüls’ side eventually sealing the win.

The OK Liga got off to a good start with a win for FC Barcelona Sorli Discau. The roller hockey first team, who were also presented before the match with the League Cup won last season, defeated a determined Mataró outfit.

The first half was anything but dull. Barça Sorli Discau got off to an electric start, with Alberto Borregán opening the scoring after just three minutes of the game.

But Mataró also started their season with goals. Marc Roca stole the ball from a Barça attack and surprised Aitor Egurrola will a well-placed equaliser. 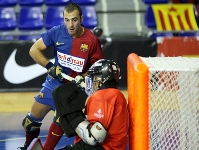 Throughout the first half both sides put together some delightful attacking plays. Panadero showed his skill with the stick and cold blood in the one on one with the keeper. Pana dribbled around Roger Fernández to place the ball in the back of the net, a clever move that put Barça back in command (2-1).

But Mataró were by no means deflated by that, and responded with two goals in as many minutes, from Roger Arnau and Albert Casanovas, both of which took advantage of poor positioning in the Barça defence, and the visitors were on top.

Before the break, a Miquel Masoliver effort was deflected in off Casanovas, making it 3-3 after 25 minutes.

Following the feast of first half goals, the second half featured more conservative play from both sides. The defenders got their acts together and less danger was created in front of the two goals.

But Miquel Masoliver managed to score, but the umpires disallowed his effort.

Also worthy mention was the solid Aitor Egurrola, once again demonstrating that he is one of the best goalkeepers in the sport. 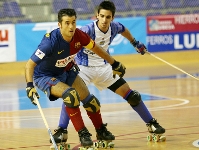 With 13 minutes to go, the goals started flowing again. Carlitos López stole a ball and spotted Miquel Masoliver off his line. A quick show of wits saw Barça regain the lead at 4-3. That joy was short-lived, however, for Formatje ended a counter attack with a powerful shot to bring things back level on four each.

Then up stepped Borregán to make it 5-4, a goal that knocked the wind out of Mataró. There were five minutes left to play, but they looked far less confident of coming back this time.

Three minutes later Beto came close to sentencing the tie for good, but perhaps made more of it that he needed to, and his effort went just wide.

Barça had one or two other minor chances before it all ended at 5-4, the first win for Barça Sorli Discau in the 2008/09 league season. 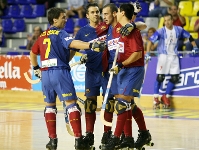