Barca Sorli Discau needed just 10 minutes of inspiration to make sure they took full advantage of playing at home to win the first quarter final game in the OK Liga against Lleida.

A hat-trick from López and one each from Páez and Ordeig made it 5-0 after just 13 minutes play. Junior player Ferran Rosa rounded things off with a goal in the second half.

The win was even more impressive considering Barca were without their injured captain Alberto Borregán, who watched the game from the sidelines.

Home advantage exploited to the full 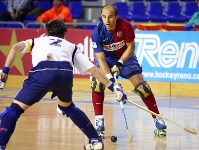 As usual, the quarter final play offs began at the Palau after Barca had finished top of the regular season, which will give them home advantage in the case of a drawn series – something which by the looks of their performance against Lleida, they probably won’t be needing.

Carlos López got the scoring started after just two and a half minutes with virtually the first attack of the game. Five minutes later, Lluís Teixidó’s shot from the right was parried away Gascón, only for David Páez to pounce on the rebound and make it two. There was no time for Lleida to react as 30 seconds later Mia Ordeig scored number three.

Argentinean Carlos López then grabbed two quick goals for his hat-trick and after just 13 minutes, Barca were out of sight at 5-0 up. The lead allowed Barac to bring on one of their young promises Lluís Ferrer, who was to have quite an impact in the second half. 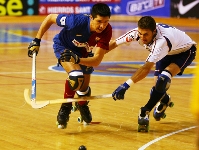 With the game virtually won at half time, Paulis rang the changes to give some of his more senior players a rest and Ferrer rewarded his faith with number six. It could have been more, with Mia Ordeig, Carlos López and Miquel Masoliver all going close.

The second game of the series is at 21.00 on Tuesday April 21 in Lleida and a win will see Barça Sorli Discau through to the semis and give them time to prepare for the Final Eight of the European competition. 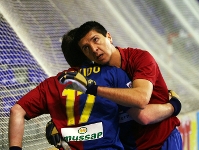