Barça Sorli Discau want to finish the regular season as leaders and after beating Liceo 4-2 have five points more than Vic, with just six still to play for.

Missing the injured Mia Ordeig and suspended Miquel Masoliver, Barça Sorli Discau had a tight squad for the third from last game in the OK League.

Barça Sorli Discau dominated the opening exchanges but Liceo scored first as the visitors made the most of all their chances.

Reinaldo García was having a great game and created a chance to shoot which made the score 0-1. Then two minutes later Jordi Bargalló used his bulk to storm through the Catalan defence and score the second.

López turns it round 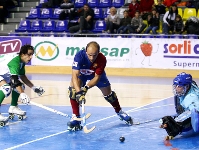 Barça, missing the injured Mia Ordeig and suspended Miquel Masoliver, then began the minimum rotation available to them as López came off the bench to get the team clicking.

Lopez immediately ramped up the game with shots and assists to Borregán, Panadero and David Páez.

Both teams then started to change things round more. 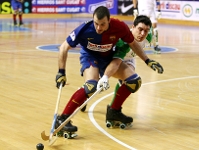 At the start of the second half the Catalans were more focussed with still a lot of game time to go. Beto Borregán fired in a shot which hit the post and then rolled into Llaverola’s goal.

Captain Beto Borregán turned the game around in seven minutes. After getting the equaliser, he then took the ball round behind the goal before finding the perfect angle for a shot to make it 3-2.

But Barça still wanted more and no sooner had the Catalans’ captain got the ball again than he scored to make it 4-2. 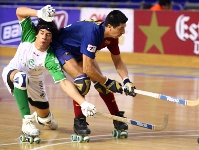