Barça Sorli Discau stays top of the OK League despite a lacklustre performance against relegated Sitges. The visitors took the lead three times and it wasn’t until the second half that Barça took control of the game and the scoreboard.

It promised to be a difficult game and that’s exactly how it turned out. Nobody was looking forward to it with a vital European game against Valdagno coming up on Saturday threatening to distract the players. Sitges took full advantage with a good performance backed up by goals. However, Barça Sorli Discau had the talent and the time to come back in a match that the visitors were winning 1-2 at halftime.

In addition, Vic lost in Riazor against Liceo (4-2), stretching the gap between first (Barça) and second (Vic) to five points.

Sitges go for it

In the opening minutes, Alberto Borregán failed to convert a penalty but despite this setback, the Barça players continued to put the Sitges goal under pressure. The visitors, with nothing to lose, fought back in the same fashion until Sergio Miras, a product of the Barça academy, put one past Octavi Tarrés.

However, this slender lead lasted for just under four l’s men showed the same the same goal hunger as they have all season and refused to be intimidated. A counterattack started by Sergi Panadero led to the equaliser from Carlos López.

Barça’s joy was short-lived as Sitges went ahead again through Oriol Pena, and hung onto to the 1-2 score line until halftime.

The halftime talk had the desired effect on Barça and Panadero powered in his team’s second equaliser only for Miras to bring the Sitges bench to their feet when he hit a third for Sitges just two minutes later.

The game was wide open and both team had their chances. The Barça players continued to show their class and soon made it 3-3. Mia Ordeig found Carlos López, who crossed and Borregán slotted in past Ribó.

Sitges held firm and Oriol Pena should have put his team ahead again. The miss proved costly as Miquel Masoliver put Barça ahead for the first time in the match.

Borregán got the fifth to put the result beyond doubt and cement Barça’s place at the top of the table. 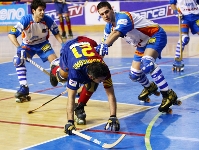