Barça Sorli Discau came from behind to beat Grup Castillo Lleida 1-3 and with Vic losing 3-4 at home to Alcoi, Quim Pauls’ team moved to top spot in the OK Liga.

The injured Lluís Teixidó was missing for Barca, but they still started well with Borregan hitting a post early on. It was Lleida who opened the scoring though when Mig Ordeig saw a yellow for a foul in the area on Antoni Sero which he converted himself.

Barca tried to come back immediately and Borregan and David Paez both came close, with the latter missing a penalty.

Lleida were standing toe to toe with Barca though and Gaspar nearly made it 2-0 before the visitors turned the game around in a flash as Panadero (2) and David Paez rocked the home team with three quick fire strikes before the break.

The rhythm hotted up in the second half as Lleida sought to get back into the game and Egurolla was called on to make a couple of important stops, but Barac were more than able to match Leida and take the points that put them back on top of the table. 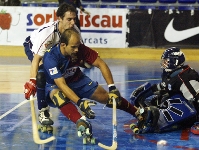