Barça Sorli Discau has beaten Vic 1-3 away in the one before last round of European League games. The win isn’t decisive for Barça who need to win or draw their last match at the Palau against Valdagno.

Quim Paüls’s men have beaten Roncato Patín Vic away in a game between Europe’s top two sides. Barça were more effective in front of goal as Sergi Panadero and then Miquel Masoliver scored in the first half. At the start of the second, Lluís Teixidó rounded off a counterattack to make it three nil, while home side captain ‘Titi’ Roca pulled one back.

In an exciting game, Pana, Maso and Teixi put Barça into a virtually unassailable lead at 0-3 which they simply needed to defend to win away at Vic.

The win doesn’t mean Barça Sorli Discau are through to the Final Eight, as they need to win or draw with Valdagno in their last regular season game. Vic have to beat bottom of the table Iserlohn from Germany to get through.

Both Roncato Patí Vic and Barça Sorli Discau went looking for goals right from the start as neither side wanted to leave anything to chance.

They were playing tough in defence as well. Sergi Panadero battled with Jordi Adroher and the referees awarded a penalty to Vic (3’). Adroher himself took it only to see his drive saved by Egurrola.

With the game being played at a high tempo, Barça broke and Sergi Panadero swept in from the right to beat Sergi Fernández with a low shot. Vic almost pulled one back straight away but Romŕ Bancells couldn’t beat Aitor Egurrola in a one-on-one.

Masoliver on a roll

The game was still being played at a 100 miles per hour as Jordi Adroher showed his skills with a shot that the visitor’s keeper did well to push aside. Miquel Masoliver then picked up the ball and fired home from a narrow angle to make it two nil to Barça.

Teixidó gets in on the act

Barça promptly scored their third in the second half. Once again they hit on the break after a Vic attack as Lluís Teixidó beat Sergi Fernández in another one-on-one. The home side knew they were in trouble and tempers became a little frayed.

Vic stays in the game

But Roncato Patí Vic didn’t throw in the towel and continued to push forward until finally ‘Titi' Roca found the net to cut the visitors lead. The last few moments of the game were a tense affair. Egurrola was superb in the Barça goal and kept out a barrage of attempts from the home side. Panadero had a penalty to add to Barça’s lead but saw his shot saved by Fernández. Vic kept up the pressure right to the end but Barça held on to run out winners by three goals to one. 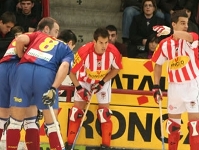