Barça Sorli Discau have gained their first win in 2009 with a 2-1 victory over Lloret. A fine first half left them 2-0 up at the break, but Lloret got one back to make for a tense ending to the game. 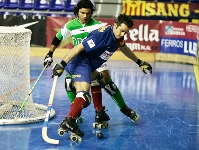 Barça went at it right from the off and Alberto Borregán took less than four minutes to put them ahead.

Lloret tried to fight their way back into the game and even got a penalty, but Lladó’s shot was saved by Octavi Tarrés.

With a 2-0 cushion, Barça Sorli Discau looked to play good hockey. Borregán was in particularly fine form yet was unable to score again as shots came back off the woodwork and he also missed a penalty.

Lloret had some chances on the break to pull back a goal with both Lladó and Cortijo going close, but Barça were also determined to extend their lead.

With just over a minute left on the clock for the half Borregán and Carlitos López almost fashioned a third between them, but the scoreboard still read 2-0 at the end of the first 25 minutes. 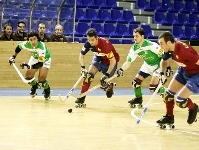 Both teams were pushing forward, but made sure their defence was solid to avoid being caught on the break.

Carlos López provided a great assist for Miquel Masoliver behind his back but Barça’s number 4 was unable to convert it into a goal.

Who did manage to score, however, was Xavi Lladó who surprised Tarrés with a shot between the keeper and the left-hand post in the 12th minute of the second period to make it 2-1.

The last part of the game was tense as both teams had lots of chances to score. ‘Cachi' Páez and Sergi Panadero almost stuck it away and Borregán hit the woodwork again, but Lloret also saw Tarrés make some crucial saves as Barça held onto their lead. 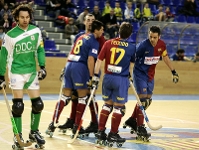