The return of the World Cup Under-20 players

The internationals from the Barça B team who played in the World Under-20 Championships returned to work on Wednesday. Eusebio was able to direct training with the whole squad, with the exception of Soriano, Ilie, and Muniesa. 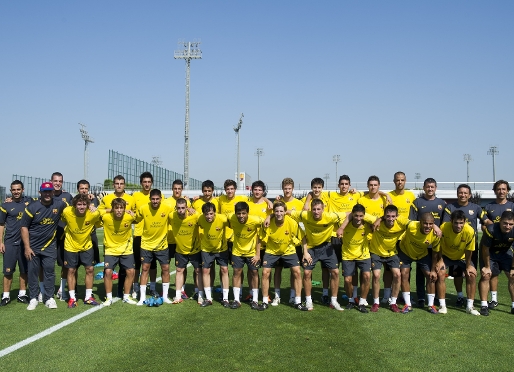 Sergio Roberto, Marc Bartra, Christian Tello, Carlos Plana, and Kiko Femenía joined in training this morning with the Barça B team. They came home after being knocked out on penalties by Brazil in the World Under-20 Championships in Colombia.

This was the first session where Eusebio Sacristan has been able to have almost all his troops available, after having, throughout the preseason, lots of absences, due to the European Under-21 Championship, the European Under-19’s, and the World Under-20’s championships, as well as the players who trained with the first team. This first session consisted of various drills and mini matches to get the players functioning together.

The only absentees in this first training session were Jonathan Soriano, Muniesa, and Ilie, who are still recovering from their respective injuries, as well as Montoya and Jonathan Dos Santos, who are still training with the first team. None of them appeared in the first group photo of the season.