The new Barēa B manager has told his presentation press conference that he is loaded with energy going into a job he feels privileged to take. Eusebio Sacristįn congratulated his predecessor Luis Enrique and says he intends to continue his work.

He said he will “maintain the same style and philosophy of the last few years that is giving such good results”. He will take on ‘if it ain’t broke don’t fix it’ approach, adding improvements if he can. “I haven’t had a chance to speak to Luis Enrique” he said, “but I’d like to thank him for all the work he has done before me”. Eusebio signed a one-year contract today, for which there is an option to one year more, and has said “it is a privilege to be back home”. 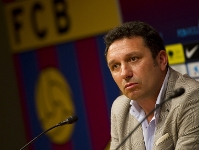 He added that “I want the players to improve as footballers and people. We will be making the same high demands of recent years. That is the best way to ensure that the players are in the right condition to go into the first team … a reserve team has different particularities than a team like Celta, the other team I have managed. I know about the Barēa first team’s needs and these need to be known in order to ensure good communication between the coaches”. Eusebio has already spoken to Guardiola and thinks they will find it very easy to get on.

On the day the fixtures were released, he was asked whether he would prefer a good position in the second division or for his players to be promoted to the first team. He was clear that “the aim is to coach players for the first team and if one, two or three of them join Guardiola next season, we’d be delighted”. 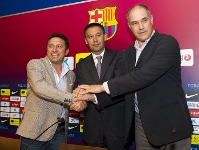 Eusebio Sacristan’s presentation was also attended by the vice president for sport Josep Maria Bartomeu and the Sports Director for Professional Football Andoni Zubizarreta, who said that they never considered any other names than that of the man sat next to them. Bartomeu said “the Board only received one proposal. Eusebio knows all about the Barēa values and philosophy”. Zubizarreta, meanwhile, said that the man from Valladolid knows the club, the competition and the division, which were key reasons for sitting Eusebio on the Miniestadi bench.