Andreu Fontŕs has extended his contract for a further season, keeping him at the club until the end of the 2011/12 season.

The 20-year-old Barca B defender is currently training with the first team and this morning he came into the club offices to put pen to paper on a contract extension that’ll keep him at the Nou Camp till June 2012. President Sandro Rosell and Vice President Josep Maria Bertomeu were both present at the signing. 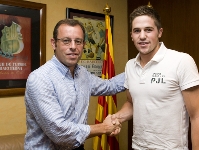 A clearly pleased Andreu spoke to Barca TV after signing his contract and revealed: “I’m very happy to be able to stay on here. That’s what I wanted and the club have shown great confidence in me, which is an important thing as far as I’m concerned”. 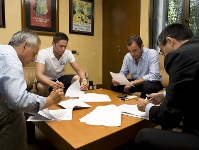 Andreu Fontŕs is starting his fourth season at the club, having begun with the Juvenil A team under Alex Garcia after coming from Girona. He played all season as a central defender or defensive midfielder, playing in 28 of the 30 league games. 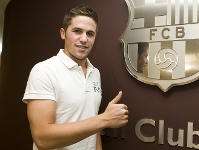 The following year he moved up to Barca Atlčtic and after a first half of the season in which he had few chances, Luis Enrique decided to put his trust in him and he played a total of 1578 minutes over 20 games. Last season, Fontas was a key part of the team and only an injury in the closing stages of the season kept him from playing more than the 2407 minutes over 26 games. Fontŕs made his debut with the first team against Sporting in the opening game of the 2009/10 season. 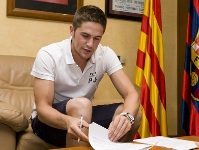 Fontŕs is still recovering from last season’s injury, but he’s optimistic about his chances: “Guardiola told me to recover and take it easy and I hope that I can be back in full training soon and show what I can do, like all the Barca B players”.