“If it were possible we could be promoted"

Luis Enrique: “If it were possible we could be promoted"

Luis Enrique left Barça B on Saturday, and said it was sad his team is ineligible for promotion to the first division. The interview will be shown on ‘Promeses’ on Barça TV this evening at 23.15. 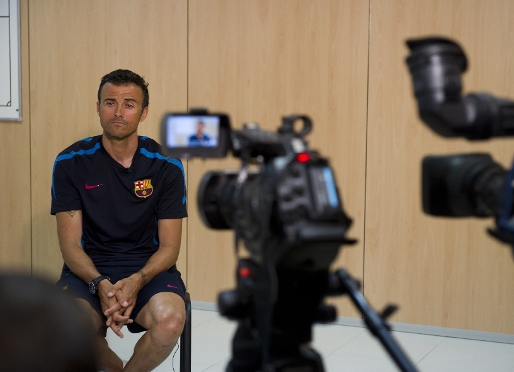 Do you feel sad about your decision to leave Barça B?
“If footballers have a short life at one club before moving on, it’s even more so for coaches, I expected this when I started in the job. I have to say they have been three fantastic years. I decided the cycle had come to an end. I said that before the offers started coming, before there were any speculations”. 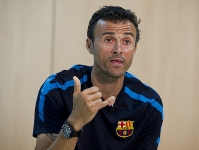 How have your players and colleagues reacted to your decision to leave?
“There’s a great team here, top quality players and we all work the same way. With such positive group synergy and dynamics, where everyone feels important and that they are helping each other to achieve things, there are undoubtedly bonuses. That’s happened here for three years, I’m satisfied and proud because I think some of the thanks for what we have done has come down to me”.

Has anyone asked you to rethink?
“They know that I like a joke but that I take my work very seriously. I have joked that in a week or so I’ll go into a press conference and tell them it was all a lie. It is normal when there are changes in the group for them to bond together, and normal for there to be doubts. I have no doubt that whoever the club chooses to take over will be well capable of it. I have no doubt that there are high quality professionals at Barça B right now who will adapt to the needs and demands of whoever the new coach is and that there will be just as much positive energy”.

A lot of people think you’d be the ideal replacement for Guardiola with the first team...
People are very nice to me. Barça is my home, the people are polite and have always shown affection and considered that we are trying to make sure things are going well. Being first team manager is a much bigger thing, few people can do it and we have the best man, the man I always wanted and hope he stays for many more years. Who knows who will be next? Just knowing I have been here and that people think I might be ready is enough for me, but I don’t live off dreams … I don’t what I’ll do now. I wanted a rest, but they’re making it hard for me and so I’ll think about it with my family and the people I’d like to work with, and about how I can do it, and if I’m convinced I’ll get involved. And if the day comes and the club thinks I’m ready, that would be great, but it’s not my objective. My objective is to live for the present and nothing else”. 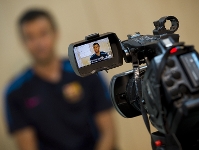 How have you treated your players? Did you ask more of them than is normal of a B team?
“I think my players are better than those in the first team. I think they could beat the first team... Some people will say that that’s impossible nonsense, but I really want my players to think that, that the coach has blind faith in his players, that’s basic for me, with confidence you can do anything. I won’t accept any player not being ambitious, who doesn’t try their hardest, because they’re kidding themselves, not me. I think a player grows more with demands, needs and confidence. That’s what I’ve always thought anyway. It is so easy to train with players like these. I have tried to give every player what I think they need to perform to their best. The idea is to help. That’s why psychologist Joaquín Valdés has been so important, he’s done an incredible job”.

How have you made the players put the team before individual interests?
“That’s football, it is a team sport, no player can worry about themselves more than the group. That chance doesn’t exist. You have to play well as part of the team, to add to things, to organise, if you want to express yourself, you have to do so as the coach says, in the way that most helps the team. A coach is not after personal objectives, he wants to win. But as well as trying to win, my job here also meant training players to be ready to move up to the first team whenever Pep needs them. We did that to perfection. Imagine ten men thinking: ‘I want to shine; I don’t care about the score’. No, thankfully Pep doesn’t go in for that philosophy”.

Is hard to stop the players from wanting to make the top too quickly?
“Not really, they have to work hard, of course. We have to forget about imitating Messi. Messi was one like we won’t see again for 300 years, he moved up when he was 17, but we have to forget about him. He went up at 17 because the Juvenil team became the C team and he was top scorer in just 8 games, he went to the B and he was the best in the B... If a player can do so well at these stages, yet remain as humble as Messi did, then it was normal for him to go up to the first team. Here we are lucky enough to have a B team that plays at a professional level and it is a great place for trying players out. It would be great for players to join the B team and be outstanding, but that’s not easy. They need to be trained and they need to be patient”.

After managing to stay up, is the challenge now to become the best B team in history?
"I am not a big fan of giving groups targets from the outset. I prefer to wait and see what happens, staying both prudent but also ambitious. We go into the first game with every intention of seeing what damage we can do to the opposition and what they can do to us. Thinking what weapons we have to win. And then after 15 or 21 games, we can see what kind of level we’re at. Can we beat this team? But the biggest handicap you have is that after the first half of the season, once you’re guaranteed you’re staying up and after spending all season in the top six places, you have nothing to play for.
The stimulus would be to get to play another play-off. My team would fly at that chance, and would probably find it quite a challenge, from what I’ve seen. That’s the problem; it’s hard to motivate them without real motivation. I think that if I had my full team we’d get promoted, I’m sure no team would want to play us and it would be hard to beat us". 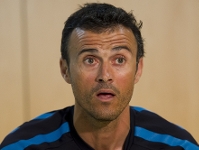 Your goalkeeper rotations have surprised a lot of people.
"Some top coaches have called me to ask how I deal with goalkeepers… When I see a player and he inspires confidence in me, I tell them we need them all. It’s about confidence; it’s about having a high level of competitiveness. You have to train hard every day to win confidence and we value the way players train very highly. I have changed my team on match days for reasons of attitude and ambition, and not because of mistakes. We get involved in these things. As for goalkeepers, I am sure there is no other team at this level that distributes goalkeeping duties so much. Possibly if one keeper had played all 42 matches he’d have developed more, but I have given them about a third each. They won those chances; I played whoever I felt was best for each match. If they are not right, their team mate plays. That way three keepers have played in an important division, and all have shown different kinds of profile. They have shown a spectacular level, and all three have gained in different ways.