Barça B, led by an excellent Jonathan Soriano, picked up their second win in a row to rise to sixth in the table. The other scorers were Tena (own goal) and Edu Oriol on a night that Deulofeu made his debut. 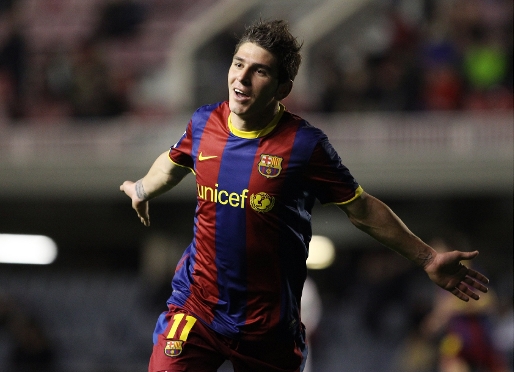 Attendance: 2,329 spectators
It is four months since Barça B won two games in a row, but Luis Enrique’s side did it in style tonight against Cordoba. There were no after-effects of Saturday’s madness against Numancia, and the home side were the vastly superior outfit, sometimes looking like a carbon copy of the first team as they dominated the possession.

Luis Enrique had several missing players, but did regain Thiago and Montoya, who had been called up by Guardiola last weekend to bolster the first team in Mallorca. Both featured in the starting eleven and played important roles in overcoming the Andalusians.

Right from the first minute, Barça B looked ready for the job. Despite the cold weather, they soon warmed to the game and looked extremely comfortable as they created all the pressure in the first 45 minutes.

Tello ruled the left wing and that was where most of the early chances came from, including one that could have meant an early lead, but Edu Oriol’s 7th minute effort struck the crossbar.

Cordoba just didn’t appear to have the resources to cope with a Barça B side that was doing everything right. Lucas Alacaraz’s side failed to create any danger, and Oier barely had anything to do in a first half that ended scoreless. 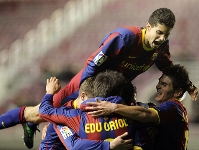 Just two minutes into the second half, Barça B finally broke the deadlock. It came from a terrific pass by Thiago that Jonathan Soriano struck beautifully, and the ball bounced off the post and into the back of the net, making him Barça’s highest ever goalscorer in second division matches.

But the joy was short-lived, because just a couple of minutes later Useo equalised with a goal scored after a confused mess in the Barça B area.

Barça back on top

The goals were suddenly flying in, for in the 58th minute, Montoya, who had made his first team debut on Saturday, made a brilliant run that he finished with a cross to Jonathan Soriano. But before the ball reached its target, Cordoba defender Tena intervened, but had the misfortune to turn the ball into his own goal.

The 2-1 boosted Barça and Jonathan Soriano rounded off a great performance with yet another goal, his 17th of the league campaign, in which he got on the end of a Thiago assist and finished the move by slotting the ball under the keeper’s legs. 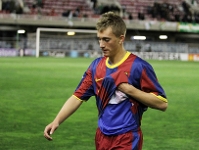 The fourth goal was scored by Edu Oriol in the 75th minute, a blistering shot that Cordoba goalkeeper Alberto García could do nothing to stop. Luis Enrique then opted to take the striker off and replace him with 16 year old Gerard Deulofeu, who thus made his debut for the side. The youngster didn’t take long to show his worth, and almost scored after being on the pitch for just a minute.

The Barça B win puts them on 41 points, and their next game is on Monday against Tenerife.