“Nobody better than Barēa for this agreement”

Gates: “Nobody better than Barēa for this agreement”

The founder of Microsoft is delighted with the agreement between his foundation, Bill&Melinda Gates, and the FC Barcelona Foundation for the eradication of polio from the world.

“I am very happy with the agreement with Barēa, because we have the common cause of looking after children’s health”, said Bill Gates during the presentation of the agreement .

The American praised FC Barcelona for such commitment and stressed that their objective “is to eradicate polio, something which is now much closer, but unfortunately there are still many people with this illness”, he said.

Bill Gates also spoke about how the agreement will help get the message across to more people. “Through this agreement we can say that that objective can be reached, and people have to receive the message so that they can help us”, he said. 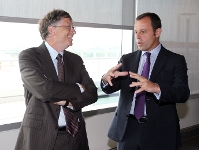 The president of FC Barcelona, Sandro Rosell, speaking to Barēa TV also spoke about the agreement. “Our objective is to transmit the values and messages of Bill&Melinda Gates”, he said.

Sandro Rosell also said that “once the objective of eradicating polio has been achieved, and there is only about 1% left to go, we shall support whatever other project they create”, while also pointing out that his club’s role will be focusing on “Barcelona and the Camp Nou” but without forgetting its global projects.

Bill Gates also said that “we are associating ourselves to a great organisation, which is known around the world … Barēa is unique and the ideal companion for this agreement”.

He also spoke about how “Barēa has sponsors, Unicef and the Qatar Foundation, who help a lot of people and are sponsors with values”.

He ended by repeating the message once more: “We want to eradicate polio together.”