Barēa’s first day in Washington ended with a visit to the Penya Barcelonista, a young but dynamic group that is the meeting point for Barēa supporters in the US capital. 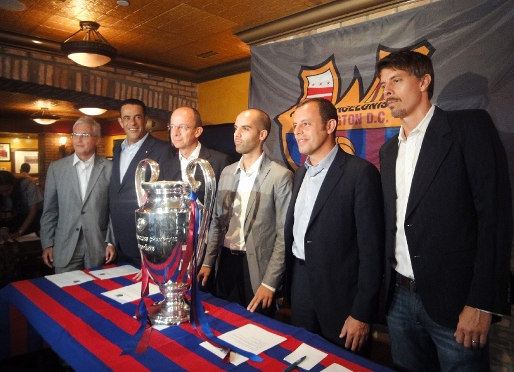 The Elephant & Castle Pub is located at number 900, 19th Street, Washington DC. That’s useful for any Barēa fan visiting the city to know, because it’s the home of the Penya Barcelonista Washington DC. This is where the club was established in late 2009, which now has more than 175 members. 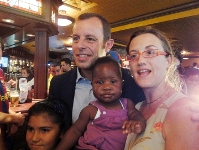 Rosell said that its supporters clubs are one of the reasons why Barēa is ‘More than a Club’. After mentioning his meeting a few hours earlier with the Bill & Melinda Foundation, he spoke to the local supporters club, saying “thank you for helping the Club become even bigger and better known.” Jordi Cardoner also said how pleased he was to see so many young people, because “supporters clubs like these help promote the Barēa brand … I hope that if the time comes that our results are not as good as now, that you will continue to work so hard”.

One of the funniest moments came when Sandro Rosell joked that the president of the Penya, Raimon Puigjaner, was a dead-ringer for the Barēa coach. “It looks like Guardiola has a brother in this supporters club” he laughed.

The organizers spoke about the social program they are working on in association with the DC Scores charity, which combines soccer with academic support for more than 800 boys and girls at 26 schools, aged between 8 and 15 years. Just like Barēa, this supporters clubs is about more than just soccer.