Record attendance at the Museum

With nearly one and a half million visitors and a 66% increase in turnover, the FC Barcelona Museum closed the season with a more than satisfactory balance. The new format, new content, and club achievements, are the fonts of this success.

More info
Absolute and historical record. This is the conclusion of the season’s balance of the FC Barcelona Museum that during 2010/2011 received a total of 1,492,867 visits. The museum attendance has increased by 27% over the previous year, an increase that translates into 320,846 visitors more than during 2009/10, when 1,172.021 people turned up. The increasing numbers have led to an increase in turnover of 66%.

The vice president of the social area, Jordi Cardoner, valued as "very positive" the results obtained "by a significant space that helps in the understanding of why Barça is more than a club".

Identity and Barça achievements as the keys to success

"The factor of sporting excellence of our team is indisputable and FC Barcelona is a magnet at national and international level. Aside from the sports results, the greatness of our club and social values that we have been able to transmit around the world have been vital". These are, according to Jordi Cardoner, the key factors in the success of visits to the Camp Nou Experience. 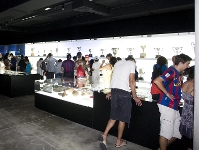 Since its inauguration, the Camp Nou Experience has been a total success, and visiting the FC Barcelona stadium has become an almost indispensable stop for tourist buses in the city. Inclusion of the visit in the of tour operators programs means that the summer months are the busiest. Last August, with 214,526 visits, was the period of greatest affluence. On the other hand, there has not been a month where the visits have dropped below 54,000.

Although the bulk of visitors to the museum are foreigners, renovation and modernization of the facilities have attracted the interest of the local public. The increase in visitors from this sector is very satisfying for the Club, which expects this trend to continue during the current year and will remember that this was the best season in Barça’s history.

The museum, a living installation

Satisfaction with the results obtained is undeniable but it is accompanied by the desire to continue working to maintain them and even improve them. "The club understands that the Barça Museum should be a living museum that can be fed from a source which today is priceless, such as objects donated by members and fans," said Cardoner.

The creation of a new space for the 16 professional titles won in 2010/2011, the opening of a permanent exhibition of the Foundation and the updating of multimedia content are some of the future initiatives to be undertaken by the Barcelona Museum.