The presence of the President of the Generalitat, Artur Mas, and Barça President, Sandro Rosell, raised high expectations in Salt, on the occasion of the pilot of the project “Football Net”, which supports the integration of youngsters through sport. 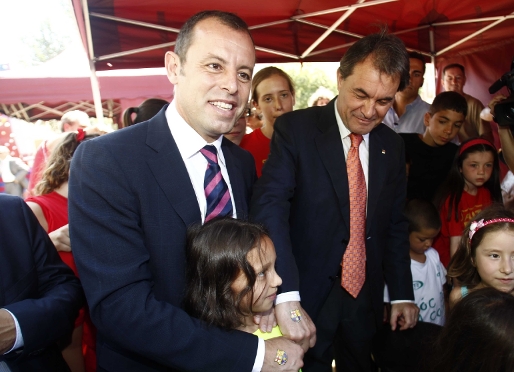 A festive break for the pilot of the Football Net project, led by the Barça Foundation, with the collaboration of the Generalitat of Catalonia, Salt Town Hall, "La Caixa", and the Foundation Ser.Gi, as well as Coca-Cola.

This expectation was due to the presence of President of the Catalan Government Artur Mas, and the President of Barça, Sandro Rosell, who gave the starting signal for the various football matches played throughout the day at the ground of Les Guixeres, involving over 300 youngsters between 10 and 16.

Compliance with the ground rules off the pitch 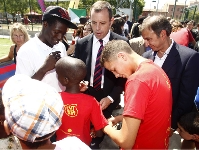 It was in this place where the two leaders spoke about project. For his part, President Artur Mas called for "the values of football to be applied off the pitch.......the kids are the stars today. Maybe one of the players out here could become a Barça player, or even a future president of Barça, or even Catalonia. Here they’ve explained to us the game rules in football. The country also has ground rules. If they are complied with everything will get better. I only ask that everyone on and off the pitch comply with the rules".

The ground rules, according to Mas, are "studying in school, listening to the teachers, have good relationships between yourselves, and help each other as you do in football". He also called for "fair play and a clean game".

Football as a means of integrating 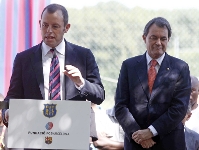 On arrival, President Rosell saw that many of these kids who play football came up to him. They wanted to talk to him. The Barcelona President said, as an anecdote, that these kids who talked to him said they were like 'brothers' of some of the FC Barcelona players. This means that the kids feel close to the players that make up the squad. "Today I met many brothers of Afellay, Keita, Messi ... This is the value of having values" said Rosell.

Rosell was pleased by the fact that these kids use football as a means of integration: "Keep playing football, but educate yourselves as individuals through hard work, friendship, and discipline. Today, here in Salt there are two languages that unite us: Football and Catalan".

Later, the two presidents visited the different tents where they held several workshops, and the celebration ended with a joint photograph of all institutions involved in the project and the 300 kids. The photo was taken on the football pitch.