Assembly: prior meetings with member delegates

Assembly: prior meetings with member delegates

The vice president of the Social Area, Jordi Cardoner, announced that, before the General Assembly, he will convene meetings with member delegates to provide all information on financial matters.

Balanē Ąrea Social 2010-11 - FC Barcelona
View more presentations from FCBweb
At the beginning his press conference, Vice President Jordi Cardoner announced that from now on members delegates will receive the information before it’s made public on the day of the Assembly. "We want to be more participatory and representative" he said. Thus, members will have more time to study and analyse the data and not just receive all the financial information on the day of the Assembly. Cardoner explained that with these meetings prior to the Assembly, the club will gain more "openness and closeness".

The vice president reported that the Assembly will be in September or October this year and, with the aim of promoting participation, will coincide with a match-day at the Camp Nou.

Jordi Cardoner also gave an update regarding the management of change of name on the season tickets at the Camp Nou. From now on, one must have been at least two years on the waiting list, a condition extra to the already existing ones. It’s worth remembering that to change a name on a season ticket, the person must have been a member for five over years, be a direct relative, and, in the case of a name change between non-family members, must have made a payment for six seasons. Cardoner clarified that this new condition is intended to prevent the marketing that takes place illegally. 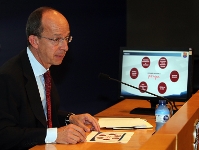 Another major point made by Jordi Cardoner was regarding tickets for Finals. This season, unlike what was done before, the club distributed 85% of total tickets available and only 15% went to club commitments (in previous seasons the ratio was 80% -20%). "With fewer commitments, we favoured our social collective" said Cardoner. In total, comparing the final at Wembley with that in Rome, 44% fewer invitations were allocated.

Stabilising of the Social Masses

Looking at the balance of the season, Cardoner emphasised the stabilising of the number of members. "We are the best club in the world and we care about quality, not quantity" he said, before pointing out that in recent years the number of members leaving the club had soared to 15,000 per year, half of them with less than five years with the club. "We want members who identify themselves with Barēa" he added, giving a figure that explains the social health of the organization: the number of members who are minors continues to grow, something which will guarantee "our social strength for the next 25 to 50 years".