With more than 7 million Facebook fans, FC Barcelona is the leading sports club on the social networking site, ahead of both Real Madrid and Manchester United.

FC Barcelona officially joined Facebook in November 2009, and the number of fans has grown consistently ever since, and a year later has topped the 7 million mark. This is further evidence that FC Barcelona is the most supported club in the world, way ahead of the opposition.

Lead of a million

In second place comes Real Madrid, who have just passed the 6 million mark, while third placed Manchester United have not yet made it to 5 million. The first non-soccer club on the list is the LA Lakers, who have over 4 million fans. Baseball team New York Yankees is the only other member of the top ten that is not a European soccer club.

Barça’s 7 million Facebook fans include more than 2 million that use Spanish as their first language, followed by almost the same number of English speakers, and a million each speak French or Indonesian.

Naturally, Spain has the most FCB Facebook fans, followed by Indonesia, Turkey, France and the USA. Barça has fans in all the biggest cities in the world, but most notably Jakarta (Indonesia), Madrid (Spain), Mexico City (Mexico), Caracas (Venezuela) and Bogota (Colombia).

These Barça fans are generally very active, with an average 200,000 ‘likes’ a week. Although more than 80% of the fans are males under 35 years of age, women tend to be more active when it comes to commenting on news stories. 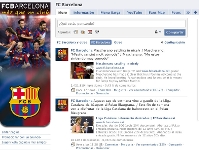