Wanted: a photograph of President Soler

Wanted: a photograph of the Club’s fifth President –Josep Soler

FC Barcelona would like to make an appeal for any photos of the Club President between 1905 and 1906, Josep Soler. Sr Soler took over from Arthur Witty and is the only President that the Club does not have a photograph of.

How to send us your photos

If you think you have a photograph of Josep Soler you can contact the Club’s Centre de Documentació i Estudis at centre.documentació@fcbarcelona.cat. “There are many people who whether they realise it or not, have valuable historical evidence hanging around their house. It’s possible that one of Josep Soler’s descendents, or a photo of another President or player of that era in which Josep Soler appears” - a photo that would be a great find for the Club.
“We have a gap in our documentation and as he was one of our earliest Presidents, we would love to have a photographic record of him”, explained the Director of the Centre de Documentació i Estudis del FC Barcelona Carles Santacana.

Who was Josep Soler?

“We really only know his name and very little more”, explains Santacana “we know he was President of the Club between 6th October 1905 and 6th October 1906. It was normal at that time that Presidents were elected for a single year. We know he was elected by an Assembley”.

At that time, when the Club was still a closely knit group of friends it was common for players to be President too and Santacana reckons: “that could be the case with Josep Soler as we know there were two Solers in the first team then”. 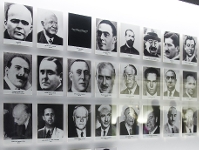 Josep Soler presided over the Club at a time when it was suffering a dip in its social activity. Membership had dropped to just 198 and the lack of titles on the sporting front, including a heavy 10-1 defeat in Bilbao was also of concern. However Santacana insists: “if he’d not been there then the others wouldn’t have come along either!” And those successors included Juli Marial, Vicenç Reig, Hans Gamper, etc.

You can consult the biographies of all the Club’s Presidents HERE .