The president of Barēa has reiterated that the club’s transfer policy this summer will have economic sustainability in mind. 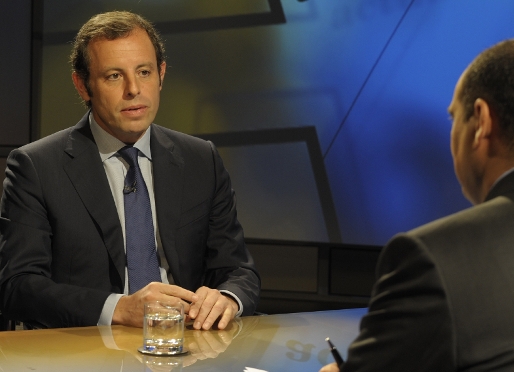 Sandro Rosell looked back at his first year as president on the ‘Įgora’ show on TV3, where he insisted that the club will be taking an austere approach to the transfer market this summer. On Arsenal star Fįbregas he said "I don’t know if we will sign Cesc or not. What I am sure of is that he is very keen to come to Barēa. But we are not going to repeat the offer of 40 million because with amortizations he is worth less”.

The same cautious approach to the club’s finances will be employed in potential transactions with the likes of Alexis Sįnchez and Giuseppe Rossi. Rosell said that the club wants to concentrate on the players that the coaches have asked for and will then decide whether the finances fit the business plan. "Zubizarreta and Bartomeu are speaking to a lot of other players and alternatives. Depending on the price, we will take one or other. No deals have been closed", said Rosell.

Rosell wants to put the club back on solid financial ground with an eye to the future. "When we came in, we found the debt was much bigger than they had told us. We negotiated a syndicate credit with the bank. We were very worried because we had no money to spend. We have sorted out the situation and what the economic area has achieved means we have 45 million to spend on transfers this summer plus sales. We have a business plan and after what we have said, the banks trust us and have given us this credit. But you have to pay credit back.” So Rosell said they have had to make some difficult but necessary decisions. "I am concerned about the club’s economic sustainability. We have to balance the books. In two or three years we hope to be a solvent club”.

On potential new players, he said "it depends who stays and who leaves." Guardiola has not asked to sell any of his first team players, and the president also said that they are negotiating a new contract for Abidal, which should be finalised when the Frenchman returns from his holidays.

Rosell also spoke about the historic agreement with the Qatar Foundation, which will bring the club an additional 150 million euros, saying the deal was essential for the club’s financial needs and debts. He also claimed that the members are fully supportive of the deal, which is permitted by the club statutes, and that he will once again be explaining the full situation at next general assembly.

Rosell is obviously delighted with everything that Pep Guardiola has been doing. "We have a very good relation with Pep, excellent. He is a man who likes to renew year by year, if it was down to us we’d renew him for one, two, three, four even five years. He feels comfortable with the players, with the directors, with his surroundings … He works well with Zubi and the new board, and that has shown in the results”. Asked what he felt about being of accused of not supporting his coach during the controversies with Real Madrid, Rosell said "I don’t accept that, and the board have a clear conscience”.

As for the economic adjustments to the other professional and amateur sports teams, Rosell said “we are still the most multisport club in the world. The professional sections will be as competitive as ever. There is inflation in football, but deflation in the other sports. Our small reduction will be nothing compared to the other clubs.”

Regal Barēa’s Ricky Rubio is about to leave for the Minnesota Timberwolves, and Rosell explained how the deal is not particularly positive for Barcelona. "It is no blessing to get a million euros because he cost us 4.2. We will lose money because we didn’t amortise the investment. But it will help that we won’t have to pay his salary and that will help reduce costs”.

At the end of the interview, Rosell confirmed that he had held a meeting with Johan Cruyff for the good of the club and unity. As for making Eusebio Sacristįn the new coach of Barēa B, the president said it had been Andoni Zubizarreta’s choice, but that the board gave him their full support.