Speaking to the media today, the president of FC Barcelona explained that he had waited before responding to the many accusations this season due to ôsocial and sporting responsibilityö. 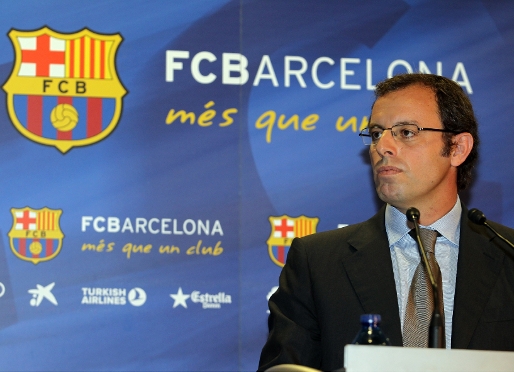 “There are two ways of acting”, said the FCB president about the claim for libel against the radio station. “We have worked with the facts, with our claim against COPE and the appeal to UEFA, using words”. In particular reference to COPE, Rosell said “we are currently making claims. COPE has imposed measures to delay our intervention. They have put sticks in the bicycle’s spokes to stop it from going fast, but it is still moving forwards”.
After Sandro Rosell had read out the FC Barcelona institutional statement, he answered questions about the different accusations against the club over the season. He revealed that it was for reasons of social responsibility that he had not spoken about these things earlier.

He said that the Board had preferred not to interrupt the good performances by the different teams that were heading for so many titles. “Anything that wasn’t in the script could have affected what our teams were doing … Events have shown that we did the right thing. It was right to make this statement today”. 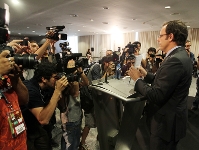 Rosell hopes that none of the accusations against FC Barcelona this season will ever be repeated again, for that could lead to the severing of all relations with Real Madrid. He said that “there is nothing in life that can’t be sorted out” and that relations with the all-whites “will get closer and better. The Barþa values include human quality and this always offers a second chance. And we want to give it a second chance”.

As for Real Madrid president, Florentino PÚrez, Rosell does not think he was the main man behind what went on, but “got dragged into it … but he is still the leading figure at his club”.

The Barþa president said that from now on he expects what is famously known in Catalan as ‘seny’ to govern the way the institutions behave. He admitted that this has been an uncomfortable year, and that “we are sports people and in sport you can always win or lose but always within the boundaries of the field of play.” However “I had to explain what has happened … I hope it never happens again. And if it never happens again, we’ll have achieved our objective.”.

Asked for his reaction to the comments by Madrid manager JosÚ Mourinho about the doubts surrounding the way Barcelona had won certain titles, Rosell said “if a high executive or employee of Barþa had done what Mourinho did, he would get a warning”. The president agreed with what Guardiola said before the Champions League first leg against Madrid and said it was something he would rather not talk about. “Everybody has their area of action and we are now speaking as an institution. At that time, Pep was speaking as one coach to another”.

Rosell also denied that he had failed to protect his first team coach properly. “Barþa was always behind him. We have done more than we have spoken about, we did a lot”.