Actions for a fuller and noisier Camp Nou

Toni Freixa has explained a series of measures to come into effect next season designed to make the Camp Nou fuller than ever and to generate even more support. 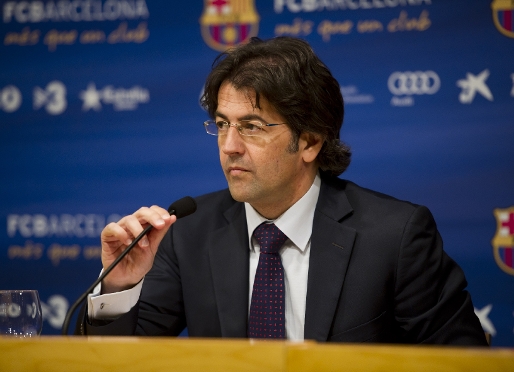 Toni Freixa said that the Camp Nou turf will be changed between July 25 and 31. “This is by request of the technical services”, he explained.
The secretary and spokesman of the Board of Directors, Toni Freixa, has spoken to the press on Wednesday about a series of agreements made at Tuesday’s meeting. These include a series of measures to implemented from next season that seek to optimise the Camp Nou attendance. “Attendances have been very good this season, but we can still improve to reach excellence” he said.

1) Members that attend games or free their seats for all matches. There are 25,000 such members. The club is planning a series of advantages to reward them.
2) Members that attend games or free their seats for between 25 and 75% of matches. This is a group of some 20,000 members. In this case, the club will be implementing measures to facilitate the use of Seient Lliure.
3) Group of some 2,500 members that never free their seats or attend less than five games a year. These will all be sent a letter whereby they will be invited to voluntarily join the inverted Seient Lliure system. In these cases, the member must inform the club up to 72 hours before the match whether they will be using their seat. If not, it will be sold on by the club.

Another measure the club plans to adopt is that of a special stand in the first tier of the Goal North, where there are 1,400 seats. The supporters that already have seats in this section will be offered the opportunity of moving to a better seating area. To form part of the special group sat in this area, members must form part of an association that, among other things, will manage access to each game for the 4,000 people that form it.

Members of this association will get a 50% discount on ticket prices. To form part of this special group of supporters, members must register on the association’s website. The people on this list will be controlled by the Catalan police force; and access to the young person’s terrace will also be regulated by fingerprint technology. The Boards’ zero tolerance of violence will remain unaltered, insisted Freixa.

As for car parking spaces at the Camp Nou, the secretary and spokesman for the Board has said they shall be reordered, to be brought into line with market costs, which will involve a 50% price increase.