The Olympic Stadium celebrated a Catalan day with lots of excitement and intensity in the events prior to the match between USAP and Toulon. 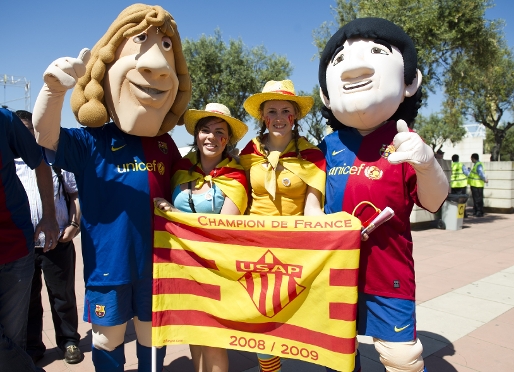 More info
From 11.00 Montjuďc came alive to celebrate a Catalan party with the game in the quarterfinals of the Heineken Cup between USAP and Toulon, that for the first time was held in Barcelona. This is possible thanks to the relationship between Barça and the club from North Catalonia.

Thus, singer Cesc Freixas, workshops for small children and for not so small children, and demonstrations of traditions like the Catalan Sardana were the main protagonists on a very sunny morning around the Olympic Stadium.

All day in Montjuic

Special buses, trains, and airplanes helped to bring the 55,000 spectators to the top European competition. Many of these spectators, as well as many rugby fans, chose to spend all day in Montjuic.

The high temperatures and the many activities led to a great atmosphere from early morning, and many opted to have lunch in the vicinity of the Olympic Stadium. Catalan flags and USAP jerseys were the common elements that brought together many of the people around the Olympic Stadium.

Workshops such as the Catalan donkey or face-painting, among other things, helped to liven up the Saturday morning. One of the most successful, was undoubtedly the rugby section of FC Barcelona.

All those who wanted to, could learn aspects, techniques and movements of rugby, thanks to tips and explanations by members of one of the oldest sections of FC Barcelona. 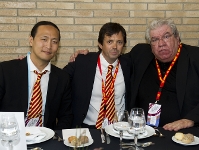 The directors of FC Barcelona, Ramon Cierco and Didac Lee and director of the Sports Academy, Pere Gratacós, were present at the official lunch, held in Palau Sant Jordi, and attended by over 200 people . At this lunch, the Catalan Rugby Federation paid tribute to Barça and the USAP. In addition, the two clubs were presented with a bronze sculpture to commemorate this historic match.

Parade before the game

Before the game, there were more activities to highlight the Catalanism of the day, like the parade of the Catalan Federation rugby schools. Twenty clubs paraded their colors before the game which kicked-off at 16.30.