Sandro Rosell backs a good course: Sweep Away Hunger with the Sweepstake

Sandro Rosell, accompanied by the Catalan President Artur Mas and the President of the Fundació Banc dels Aliments, Antoni Sansalvadó today presented the campaign “Enviem la fam a la porra” – “Sweep Away Hunger with the Sweepstake”.

During the presentation, Club President Sandro Rosell underlined the importance of the campaign: “we are helping people here at home, whilst not forgetting the international dimension of our Club”. The President called the campaign “fantastic” and went on to explain: “we are very happy to be involved in a project alongside such good company”.

The Catalan President Artur Mas also stressed the exceptional nature of the campaign, which aims to collect as much basic foodstuffs as possible to help those most in need in the country, whilst drawing attention to the plight of the people close to home who are suffering from hunger: “between us, we have to help them and this campaign is a good way to channel this country’s solidarity”. 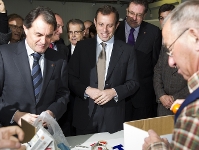 Everybody who takes part in the campaign, either by personally bringing in foodstuffs or donating online, can take part in a sweepstake on the result of the Barça-Real Madrid final of the Spanish Cup. During the presentation, Sr Rosell made his own prediction: “I bet that we will win 5-0!”, whilst the Catalan President didn’t go for a result, but reckoned: “we’ll win by four goals –like the four stripes on our Catalan flag” and Antoni Sansalvadó went for a closer margin: “Barça to win 3-1”. 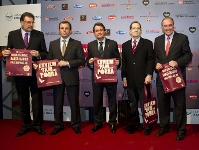 The campaign arose out of the Fundació FC Barcelona’s concern for problems which directly affect Catalan society. There are currently 1.325.000 people living below the poverty line in Catalonia and the Banc dels Aliments de Catalunya helped 52.000 families in 2008, 90.000 in 2009 and 165.000 in 2010 – a figure which continues to grow and underlines the need to support the Banc’s efforts to enable it to continue its important social work.

Anybody can participate in the collection of foodstuffs, either in person or via the campaign’s official website www.enviemlafamalaporra.org , which is available in English.

During the month of April, you may donate in person at the following sporting events:

Foodstuffs will be collected on the day of the games at the entrances to the Palau Blaugrana, Estadi Olímpic Lluís Companys and Camp Nou.

Donations via the website can be made and Sorli Discau, who are collaborating with the campaign, will then deliver the foodstuffs to the Fundació Banc dels Aliments.

As well as Barça members and fans, 15 schools from all over Catalonia are also participating in the campaign, as well as the five company sponsors -Arrňs Montsiŕ, Pastas Gallo, Llet Nostra, Grup Borges and Sorli Discau.