Under the slogan ĎAlso in health, more than a clubí, FC Barcelona has unveiled its ĎSmoke-free Camp Nouí campaign on Monday whose two objectives are to raise awareness of the dangers of tobacco and to encourage people not to smoke in the stadium.

Pioneers in Spain, and following a European and world trend

FC Barcelona is the first club in Spain to promote an anti-smoking initiative, with the ultimate aim of an outright ban in the Camp Nou. But elsewhere in the world, there is nothing new about smoking bans in sports stadiums. Since, 2007, smoking has been illegal in all football stadiums in the UK, and this is also the case in American football’s NFL. Such clubs as Ajax Amsterdam and Bayern Leverkusen have also banned tobacco. FIFA banned smoking inside stadiums at the South Africa World Cup and has encouraged national federations to follow their example.
Not only is tobacco harmful to addicts, but it is also a public health concern. As well as the direct impact on smokers, passive smoking is also the cause of deaths every day in Catalonia.

Being sensitive and responsible with respect to this problem, the FC Barcelona board of directors has decided to act. Following the decision made at the last Board Meeting, the Ricard Maxenchs pressroom was the venue today for the presentation of the ‘Smoke-free Camp Nou’ campaign ‘Un Camp Nou sense fum’, to raise awareness of the dangers of tobacco and to encourage people not to smoke in the stadium. 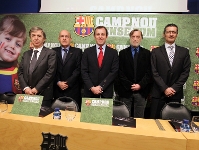 The campaign was explained by director for the Health and Performance Area, Jordi Monťs. President Sandro Rosell, Councillor for Health, Boi Ruiz, the president of the Barcelons Doctors’ College, Miquel Vilardell, and the president of the Catalan Society for the Control and Treatment of Tobacco Addiction, Josep M. Ramon Torrell, also attended the event.

“Also in health, more than a club”

“Please don’t smoke in the stadium, do it for others, for everyone’s good health, especially children”. That is the message the club is sending to members and fans that usually smoke in the stadium. The club is highly sensitive to the way that people coming to the Camp Nou are suffering as a result of passive smoking, a problem that is particularly disturbing where children are concerned.

“This campaign is not passing judgement on smokers, but is a way of protecting people’s most important treasure, their health”, explained Jordi Monťs, adding that “FC Barcelona also wants to be more than a club in terms of health”. In this regard, president Rosell said that “people can do what they like with their own health, but not that of others”, and he is convinced that the absence of smoke in the stadium “will eventually be considered normal and accepted by everyone”. 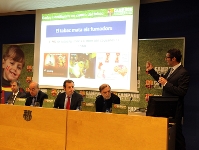 Law 42/2010 on the smoking ban that came into force on January 2, 2011 forbids the consumption of tobacco in enclosed sports facilities, enclosed public spaces and in spaces where food is consumed or handled. That means that the Box and corridors, as well as the Palau Blaugrana and Ciutat Esportiva are now non-smoking areas. The issue here is whether or not smoking should be allowed on the terraces.

The Club’s Legal Services believe that the ban could be extended to the whole stadium, for although it is open air, food products are sold and consumed there. However, the Board has decided, considering that the club is owned by its members, that it would be more appropriate to simply appeal to the smokers’ sense of responsibility and then at the Assembly of Representatives in autumn, the club will vote on the definitive acceptance of a ‘Smoke-free Camp Nou’.

The Councillor for Health, the Barcelona Doctors’ College and the Catalan Society for the Control and Treatment of Tobacco Addiction have thanked the club for joining the battle against tobacco. Boi Ruiz, Health Councillor for the Generalitat de Catalunya, congratulated the club: “It is extraordinary that BarÁa is informing and recommending rather than prohibiting, as this is a way of appealing to the members’ own sense of responsibility. It is an example that should be followed by all clubs in Catalonia and Spain”. Miquel Vilardell, president of Barcelona Doctors’ College, said he wanted “to congratulate BarÁa and its president for this socially positive decision, even though they know they will come in for criticism”.