Martini Rossi Trophy back at the Museum

Martini Rossi Trophy back at the Museum

After winning the Martini Rossi three times on the run in the 1950s, Barça were awarded the Trophy for perpetuity and from this Saturday it can be viewed at the Club Museum. 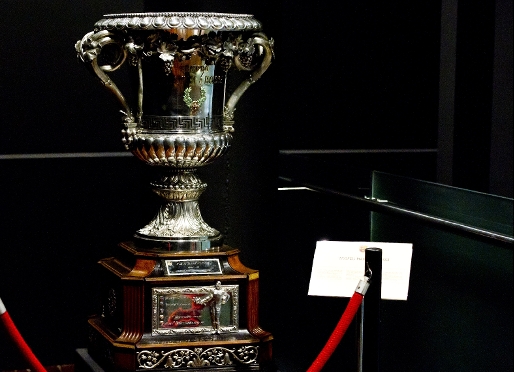 The Martini Rossi Trophy was given out in the early 1950s to the Spanish team with the best goal difference. Barça won it in 51/52, 52/53 and 53/54, which resulted in them getting to keep the trophy.

Following a restoration period, the trophy is on show at the Club Museum from this Saturday. The trophy is much valued for its size and magnificence and although it is not of great sporting value, it was important in the 51/52 season as one of the five Cups Kubala’s great team won, alongside the League Spanish Cup, Copa Llatina and Copa Eva Duarte.

The Martini Rossi company had previously sponsored two other competitions .both won by Barça. On 25th and 26th December 1948, Barça played against the Danish club Boldklub at the old Les Corts stadium. After drawing the first game 1-1, Barça then won the second 2-1 to take the trophy presented by the Matrini Rossi company.