The Club and the fans gave an enormous show of solidarity with the Japanese people, as well as sending a positive and caring message to Éric Abidal at the Nou Camp this evening. 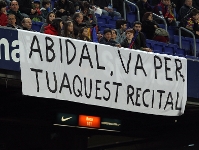 The fans showed they were not just interested in the night’s game against Getafe, sending a message of support to the team’s number 22 Eric Abidal who was operated on for a tumour in his liver on Thursday.

The fans in the ground were able to add their support to the messages Abidal has received all week, as various images of the player were flashed up on the video screen to add to the many banners of support all around the Nou Camp.

The players came out onto the pitch wearing shirts with the message “T’estimem Abi” –“We love you Abi” and the fans gave a special round of applause on minute 22 to mark the Frenchman’s shirt number. 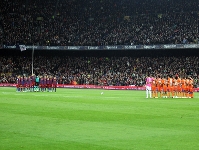 There was also a minute’s silence before the game for the victims of the disaster in Japan. The Club had previously sent a message of support via its players as well as expressing concern for the FCBEscola in Fukuoka and the two Japanese supporters clubs. Japan is also the country with the second highest number of Club members-1470.

Hidehiro Tsubaki, the Japanese Consul General watched the game from the Directors Box at the invitation of the club and declared to Barca TV: “in the same way that you are confident your players will win, we are confident our people can overcome this disaster.