FC Barcelona members have ordered 72.767 tickets for the Copa del Rey final in Valencia. As that’s more than the 13,406 tickets available, there shall be a draw on Wednesday, live on Barça TV. 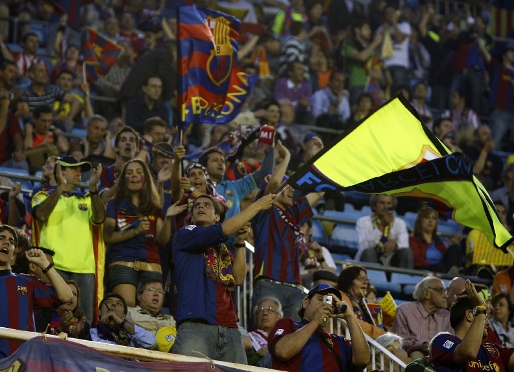 For the last cup final in 2008/09, FC Barcelona requested 49,276 tickets, once again in Valencia, but against Athletic Bilbao. This figure corresponded to 20,567 individual orders. As there were only 11,840 tickets on offer to fans, the club also had to hold a draw.
On Monday at 19.00, the application period for tickets for the Copa del Rey final at Mestalla on April 20 was closed. There has been a massive response. Members have had five days to apply (from Thursday morning) and a total of 72.767 tickets have been requested, grouped into 32.514 orders.

That’s because members can only make one request each, but up to four people are allowed to make their request together, so that they can travel together.

Draw before a notary

As usual in recent seasons, FC Barcelona will be holding a Wednesday draw at 10.00 am in the Ricard Maxenchs pressroom before a notary, who will validate the number that comes out of a computer-based draw. From that number, the 13,406 tickets that the club has on offer will be provided to members for this match.

The draw will be shown live on Barça TV and will also be attended by the vice president of the Social Area, Jordi Cardoner.

On March 16, 17 and 18, the club will be contacting the winning members. Tickets can be collected from April 4 to 12 (except for the weekend dates of April 9 and 10) from the FC Barcelona ticket offices.

When applying, members were asked to provide credit card details. These cards will be charged automatically to the chosen applicants and their tickets will be immediately reserved (60 euros). Any price difference will be settled on collection of tickets, where tickets in different categories can be chosen according to availability. Ticket collection will be by order of winning application. If the charge cannot be made, the right to purchase will be lost.

Tickets for the Copa del Rey final in Valencia against Real Madrid cost between 60 and 250 euros.

85% of tickets for members