La Fundaciˇn FC Barcelona and the Inter-American Development Bank sign an agreement to help develop sport as a social tool in Latin America and the Caribbean. 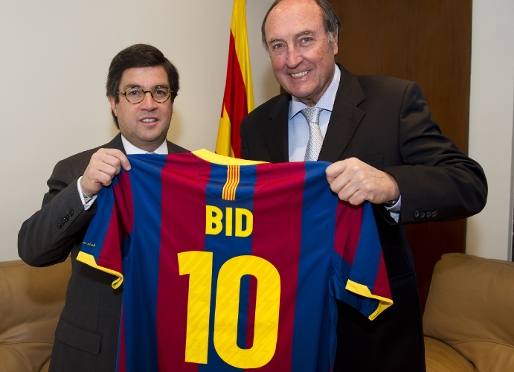 La Fundaciˇn FC Barcelona and the Inter-American Development Bank signed an agreement this Thursday to work together to promote programmes and projects which use sports as a tool to aid development and social inclusion for vulnerable children and youths living in risk situations in Latin America and the Caribbean.

The two organisations will put all their combined knowledge together to create joint programmes also aimed at preventing violence and helping to create healthy habits in the targeted collectives The IDB and the Fundaciˇn FC Barcelona will work on sporting activities in Rio de Janeiro, Brazil, together with other organisations and the City Council.

The agreement will mean the IDB will incorporate sporting activities to promote development within its programmes for Brazil as it aims to create sustainable projects beyond the 2014 World Cup and the 2016 Olympic Games.

The IDB was founded in 1959 as an association between 19 Latin American countries and the USA and it now has 48 member countries, having become the leading multilateral financers for Latin America and the Caribbean, helping to accelerate the social and economic development of its member countries.

In the last 25 years, the IDB has approved more than 5.000 million US dollars worth of loans to programmes aimed at young people, especially in the area of education, health and employment, including projects for sport and youth .
La Fundaciˇn del Futbol Club Barcelona

Founded in 1994, the Fundaciˇn aims to promote the cultural, social and educational dimension of F.C. Barcelona in the wider society, in Catalonia, Spain and abroad.

Currently, its projects, which mainly use sport as a tool to help social inclusion, benefit more than 220.000 people throughout the world.