For the first time ever, every seat in the Camp Nou presidential box for the game with Zaragoza was filled by a woman as the club recognised the role played by ladies in the history of FC Barcelona. 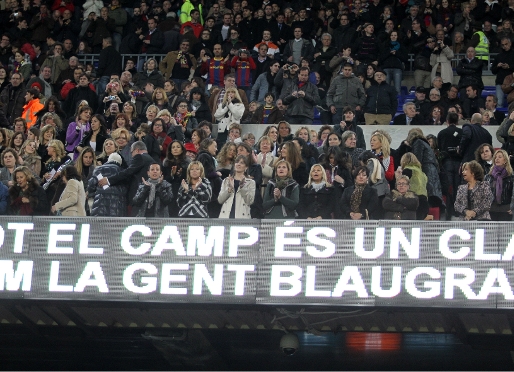 Barēa president, Sandro Rosell, watched the game, along with Zaragoza president, Agapito Iglesias from normal seats in the Camp Nou, located by gate 210 in the second tier. But before the game, Rosell was in the reception area to welcome the different dignitaries attending the game.
There were 147 women in the most important seats in the house, providing a unique image that was seen around the world.

The two ladies on the board of directors, Susana Monje and Pilar Guinovart, were the leading representatives of the club. They were joined by such people as the ladies behind the Edelmira Calvetó project, created by the board of directors, the three female patrons of the Foundation Lola Bou, Marta Martķnez de Llauder and Rosa Lleal and the FC Barcelona head of communication, Ketty Calatayud.

There was passion aplenty for FCB in all corners, with female representation of the other sports sections, employees, members of supporters clubs, former directors, former footballers from the 1970s, club senators, members of the sports and statutory commissions and others. That way, the club was able to honour high-achieving women from all kinds of different walks of life.

One of the most intense moments of the night featured Maria Buyé, granddaughter of Mercč Castells, member number 8 and the oldest female member of the club, who was unable to attend in person. President Sandro Rosell presented her granddaughter with a Barēa shirt in recognition of this 93 year old dame’s loyalty to the club.

Treasurer Susana Monje said she was delighted with the initiative: “This honours all of the women who have made this club great. It is an asset for Barēa that women play such an important role, there is no other club in the world like this one”. She was seconded by fellow board member Pilar Ginovart, who said “it is a magnificent idea because it will be seen all around the world that Barēa is a universal club”.

There were also a number of representatives of the club’s female sports teams. At half time, some of these paraded on the field, including Olga Garcķa, in representation of the women’s football team and youth teams, who was joined by 74 players; Laila Rejane representing volleyball with 162 players; Marta Andrade, the club’s most successful lady, from the figure skating section; field hockey player Helen Enos plus 66 professional payers and athlete Placida Martķnez, one of 93 female athletes at FC Barcelona.

Before the game started, the video scoreboard showed images from different periods of the club’s history in which women have featured prominently and that honoured the club’s 42,000 female members.