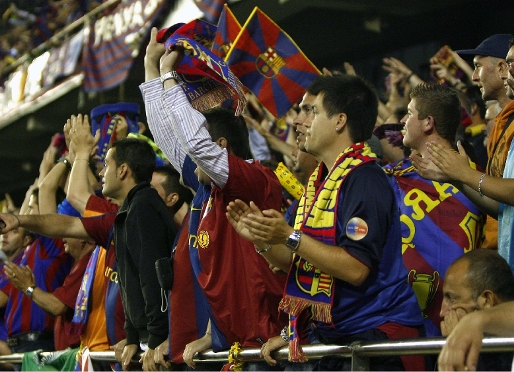 Barça members at Mestalla for the cup final two years ago against Athletic Bilbao. Photo: FCB archive.
This process is exclusive to Club members and will be open for five days, until Monday March 14th at 19.00.

Members wishing to apply for tickets must complete the on line form next Thursday at the club’s official website (www.fcbarcelona.cat). As usual, each member may make a single application in their own name, although multiple applications of up to four members may be made on the same application form so that people can travel together.

All applications will be dealt with once the process has closed. Should the demand for tickets be greater than the number available, a draw will be made on March 16 in the presence of a local notary amongst all the applications. This draw will take place, and be open to the general public, on March 16th in the Sala Paris. On March 16th, 17th and 18th, the Club will inform the lucky members who have been assigned tickets concerning the process established for the collection of their tickets, which will be between 4th and 12th April (except the weekend of 9th and 10th). Tickets must be collected from the FC Barcelona ticket offices.

Application is considered a solid declaration of intent to purchase a ticket. Therefore when applying for a ticket, members will be asked to provide credit card details. If the ticket application is accepted, either directly or through winning the draw, the card will automatically and immediately be charged for the reservation cost of the ticket. The difference due must be paid upon collection of the ticket from the Club ticket offices, when the type of ticket may be chosen. Ticket collection will be in the order of the results of the draw.

Ticket prices for the final of the Copa del Rey in Valencia against Real Madrid are between 60 and 250 euros. In the case of joint applications, details should only be given of one credit card, which will be charged the cost of all of the tickets requested. If the payment is rejected, the right to purchase is lost.

85% of tickets for Club members

Of the 50,000 seats available at Mestalla, each club has been given 19,714 tickets (40% of the total), whilst the rest are distributed by the RFEF. This year, the Club has decided to reserve 85% of its available tickets for the final (16,757 tickets), for members (13,406 tickets) and supporters clubs (3351 tickets), increasing this number from the 80% allocated two years ago. The remaining 15% (2,957 tickets) will be give to the club’s players and sponsors and or used for institutional purposes.

No tickets for children under 5

FC Barcelona has observed the recommendation by the Spanish Football Federation (RFEF) for tickets for the final not to be sold to members aged under 5 years for security reasons.

Applications for seats adapted for persons of reduced mobility must be made by directly contacting the Barcelona Supporter Services Office.Members are reminded that the Mestalla ground only has a very limited number of such facilities.