The Palau Sant Jordi again enjoyed an unforgettable night of basketball. After the Final Four in 2003 and the game against the Sixers in 2008, tonight it was the turn of the 16.236 spectators at the Lakers game to thrill to the match.

So who are the World Champions? This may not have been an official decider, but don’t try telling that to the fans who were at the Palau tonight!

There were plenty of yellow Lakers shirts amongst the crowd, but the chants and songs were all for Barça as the Sant Jordi crowd made the venue a bigger version of the Palau Blaugrana as they willed their team on to a memorable win.

None of the 16.236 crowd will ever regret the trip up to the Palau Sant Jordi tonight as they were treated to a top class spectacle of basketball that recalled the efforts of Bodiroga, Jasikevicius and company in beating Benetton, or the day that an NBA team were first taken down when the Sixers were beaten.

There was a competitive atmosphere around the game, but also an a party air –here are just some of the anecdotes surrounding a game that the Barça players are sure to remember for a long, long time: 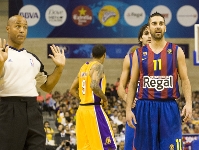 - Barça’s historic players also had their moment in the sun, with Solozábal, Epi, Flores, Dueńas and Jiménez all coming out to receive the fans’ applause. After that, it was the turn of the Lakers’ veteran James Worthy, who took Pau Gasol’s signed Lakers shirt to the Museum on Monday.

- The game was broadcast in top quality. It was the first time an NBA game had been broadcast live in 3D and the event was also available in 3D at various cinemas in Madrid and Barcelona.

- NBA commissioner David Stern believes that an official tournament between the European and NBA Champions: “would be hard because of the logistics involved. Our players are in their pre-season and we wouldn’t want to have too much more pressure put on them”.

- There was no improvisation from the NBA. Every one of the 48 minutes of the game was filled with publicity and promotion – marketing actions and cheerleaders, competitions and information about the social programmes ofteh NBA. It was all there! 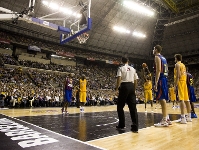