Regal Barça beat the LA Lakers in what was a very well balanced game with an electrifying finish. Navarro (25) and Mickeal (24) were Barça’s leading scorers in a game where Xavi Pascual’s team’s superior fitness and commitment proved key.

This wasn’t just a game between the European and US Champions – both teams had committed themselves to providing the fans with a great spectacle and in front of a packed Sant Jordi, in which the Barça colours outweighed the Lakers’ yellow, neither side disappointed.

From the start it was clear that both teams were taking this seriously as Jackson and Pascual sent out their best starting fives;: Kobe Bryant, who ended up playing almost three times the 10 minutes he’d announced he’d be on court, Odom, Artest, Fisher and of course Pau Gasol for the Lakers and Ricky, Navarro, Mickeal, Fran and Morris for Barça. This was serious!

Ten players made in the NBA

Gasol got the first score of the game, but Mikeal hit back straight away and any doubts as to whether this was going to be a game the players took seriously were soon dispelled as Artest and Mikeal clashed. The NBA Champs began to stretch a lead as they went 6-12 up, but Navarro then popped up with six points on the trot, including a three pointer taken in front of Kobe, to bring the hosts back into the game.

Pau, who took 12 points in the first 12 minutes(24 in all during the game), again pushed his team forward, but Ndong, Mickeal and naturally enough Navarro responded, whilst Kobe was clearly a little ring rusty – scoring just 2 from 15 attempts- but still contributed with some typically classy touches.

Regal Barça up the pace

As the teams rang the changes and Barça upped the pace, the hosts drew level at 20-20 and Mickeal managed to put them ahead before four points from Blake sent the Lakers in 24-21 ahead at the end of the first quarter.

The excellent Perovic (three rebounds and two blocks in his first few minutes) put the hosts ahead whilst Artest was benched after his third personal foul before the return of Odom, Fisher and Gasol put the Lakers back in the driving seat.

Phil Jackson made his intentions clear after the break, avoiding any changes in is five for the first nine minutes, and the refereeing of Marc Davis – who constantly frustrated the hosts with his decisions, helped the Lakers to open up a 47-53 point lead.

Some good defending from the Americans stretched their lead to 49-60 before Pete Mickeal and Morris took control, setting up Vazquez for maybe the play of the game and bringing Barça back to 68-70 at the end of the third quarter.

One of Navarro’s bombs opened the final quarter and a further three pointer from Morris and a basket from Navarro put Barça 81-78 up and another three points from Morris made it 84-78 with just
2:36 left to play. Bryant was again on court and Jackson was fielding his very best five, but Navarro and Mickeal held firm and Barça took a historic win. 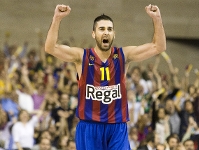