Pau Gasol and Kobe Bryant against Juan Carlos Navarro and Ricky Rubio. Both teams have some great stars for us to enjoy on Thursday in the Palau Sant Jordi. But they have already met in the street. 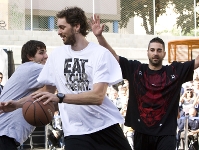 This happened in Carrer Valdonzella, in the Raval district of Barcelona. The Nike company and the House of Hoops store brought together the stars of Los Angeles Lakers and Regal FC Barcelona. Pau Gasol, Kobe Bryant, Juan Carlos Navarro and Ricky Rubio made them the referees for a street basket contest in the playground next to the MACBA (Barcelona Contemporary Art Museum), which has just been opened and is one of the legacies of the NBA champion’s visit to Barcelona, which was sealed by the players marking their hands in the cement. 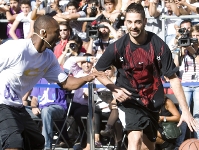 Despite the afternoon heat in Barcelona at 15.00, it was a great occasion. Ricky and Juan Carlos arrived earlier, followed half an hour later by Pau Gasol, who had been dealing with advertising commitments. The players were all on the court chatting when Kobe Bryant also turned up.

The delay was forgotten when the Lakers star started smiling and greeting the crowd that had gathered to watch, including many from Blanquerna University, which has faculties in the area.

Bryant on the buzzer 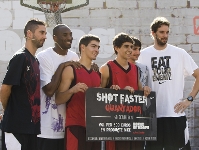 The four stars acted as coaches for the two finalists and explained what tactics they needed to use to win the game.

But they also wanted to play, but hardly divided themselves in the most balanced way, with Kobe and Pau so much taller than Ricky and Juan Carlos. Bryant scored a three pointer on the buzzer to score six (scores on the buzzer score six in this game).

The Barça players’ only solution was to force a foul with a three-point attempt. Navarro did that, but missed the first of his six free throws, so it was a win for Los Angeles. The Lakers have the advantage, but the real thing is tomorrow at the Sant Jordi. 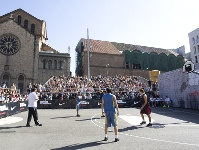 Fast basket is quick version of the game played in four one-minute periods and with twenty second possessions. Two Regal Barça youth players, Carles Marzo and Joan Creus won with a team called Bases, won the final against Espuńa and Garrote of Vic). Creus was great in the final game and the pair pocketed a cheque for €300 worth of sports clothing.