Pau Gasol and LA Lakers mania came to Barcelona on Tuesday as almost 7,000 basketball fans packed into the Palau to see the NBA side put through their paces at a training session.

Nine years after leaving the Blaugrana Gasol is back again and ready to take on Regal Barça on Thursday at 20:30. A huge number of supporters turned up to ensure that they could pay homage to their former hero as he continued with his pre-season preparations as part of the Lakers' tour of Europe. 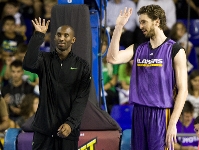 Each time that Gasol took a shot there was a loud cheer from the noisy fans, but the adoring public were also excited to see another of the Lakers' other big names as Kobe Bryant took to the court. The American star is recovering from a knock and was unable to train having played just six minutes in the game against the Minnesota Timberwolves in London on Monday. 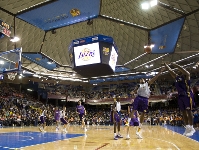 The Lakers began by playing a 3x3 game before playing a frantic circuit of defence and attack and things concluded with a practice game which involved all the players. Coach Phil Jackson looked on and shouted instructions throughout as he prepares his players not only for the game against Barça, but also the forthcoming NBA season. 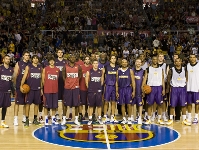 When the Lakers had finished their work the fans were treated to another surprise as Regal Barça came out on court to salute the crowd. They greeted all the Lakers players and then posed for photos together. Gasol took a microphone and then spoke to the Palau. "I am very grateful for the reception," he explained. "I hope that everything is great on Thursday."

At the end all the players threw team shirts into the crowd. 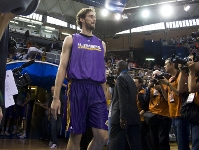 The Palau is accustomed to seeing Barça shirts, but on this occasion there were also a large number of fans wearing the yellow and purple of the LA Lakers.