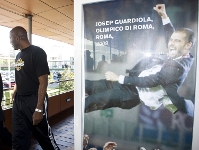 A star of the Lakers in the 1980's he took the jersey along to the Camp Nou complex with the number 16 on the back as he was keen to have a look around the Catalan club's facilities ahead of the game between the two teams in Palau Sant Jordi. Gasol has signed the shirt and dedicated to the Blaugrana where he began his professional basketball career. 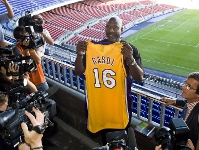 Making his way up the ramp to the Barça Museum Worthy was escorted by a host of television cameramen, photographers and journalists who all wanted to record the historic moment of his visit. Worthy wrote his name into Lakers history and into the NBA record books as he helped the Californian side to win the championship in 1985, 1987 and 1988 playing alongside the likes of Magic Johnson and Kareem Abdul Jabbar.

After dropping the shirt off at the Museum Worthy was keen to see the Camp Nou and he stepped out into the stands and looked at the arena and the pitch. 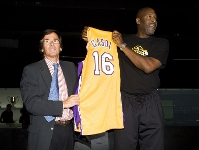